Hundreds of children explored their creativity and had the chance to showcase their newly-learned skills as part of Kendal Windows on Art’s (KWoA) Moving On Up project. 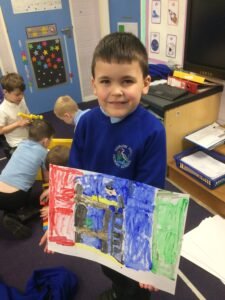 The project, which worked with Heron Hill School in Kendal, received £1,150 from the Castle Green Grassroots Fund to offer a range of creative workshops for youngsters.

Children aged between 3 and 10 collaborated with their younger and older peers to explore their creativity and develop their own skills, including drawing and painting, event backdrop decoration, creative writing, digital sound recording, and movement and dance. These activities then led to a well-attended community showcase event for their families. 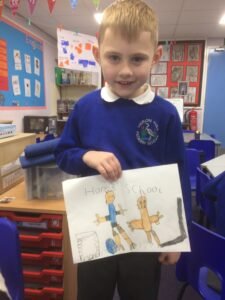 The project provided opportunities for children to look back to their past and forward to their future, exploring their thoughts and reflections further through a series of creative workshops. The children designed and made decorations and detailed artworks showing their hopes for the world as well as writing letters to their younger selves.

The showcase event was held in the school hall and was filled with backdrops of artworks from over  230 children. Throughout the project, the activities were filmed, and a video was created alongside a soundtrack made by the children, which was shown at the event, as well as a dance performance made up of 140 young dancers. 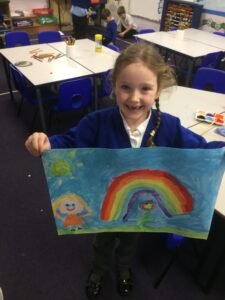 Nicki Smith, Programme Co-ordinator, said: “Children were encouraged and supported as they helped research, plan and deliver their creative activities, seeing their own ideas come to life, inspired by discussions about being younger and older as they ‘Move On Up’.

“The local community are very keen to build on the success of this collaborative project and are discussing plans for a future project with the KWoA team.”