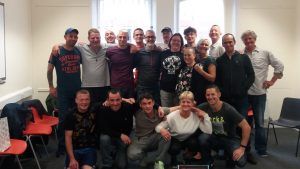 Active Recovery Community (ARC) Barrow is tackling this issue with the aim of reducing the long-standing drug problem locally.

The self-help group received £600 from the Barrow in Furness Grassroots Fund to organise activities and meetings for people dealing with substance misuse and domestic violence issues, engaging members in all activities and pro-actively looking for the best approach to abstinent recovery.

The road to recovery follows the five ways of wellbeing:

A 27 year old man from Ormsgill had been using substances since he was 13. Through talking to ARC along with his partner, he was able to get help, and made contact with two volunteers.

The man and his partner have both noticed changes in his behaviour, his perspectives on drug use and his social group have changed. He said: “The difference for me is living with a 24-hour support network with positive people and the fact I can meet up for a brew and a chat if I struggle. If I get upset or feel I want to use I am not alone, and the support is massive for me.”

ARC Barrow was formed in 2014 by a group of recovering alcoholics and addicts, all with various different skill sets, with a common goal of abstinence. They help more than 15 members on a weekly basis and are closely involved with local services such as Unity, CADAS, and The Well.

Ged Pickersgill, Group Leader, said: “This grant has offered the chance of independence to our service users and reduced isolation by becoming a part of a weekly activity based group which encourages peer to peer support.

“Emotional wellbeing and health needs are constantly assessed and there is a real increased sense of belonging. Their families all think they are more balanced as a result of joining in the group.”