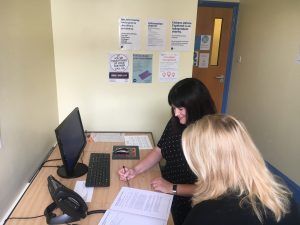 Typically, the problems for which people seek advice are debt, welfare and housing as well as employment, consumer and legal issues. Clients tend to be vulnerable, and demand for advice services has increased in times of austerity and public spending cuts.

A grant of £9,813 from the Older People’s Fund supported an outreach worker to provide specialist support to older, rurally isolated people in their own homes. As a result, 136 people were supported and more than £160,000 was secured in previously unclaimed benefits.

Mary and her husband William, both in their 80’s, have been struggling with ill health over the last few years. Mary had been diagnosed with dementia and after a fall struggled walking any distance, and William had been in and out of hospital owing to heart problems. During a home visit by Citizens Advice, they discussed their current situation and the support available and completed a benefit check as neither of them had claimed before. They were able to claim Attendance Allowance, securing an extra £114 per week which they could use to pay for extra help around the home.

Shelley Hewitson, CEO Copeland Citizens Advice, said: “People turn up in times of absolute crisis. We’d like people to come and ask for help when they first feel that they are struggling to pay their bills. Our clients are not just on benefits, we help working people too.”

Retired teacher, Irene, from Whitehaven has Parkinson’s disease. She was forced to take early retirement because a history of poor mental health led to many extended stays in a psychiatric hospital with psychotic episodes. Her husband left her with several thousands of pounds worth of debt. She said: “The Citizens Advice have helped me so much. They put me at ease, sorted out my finances and helped me find a way to deal with my debts. They’ve taken a lot of stress away from me and my family. I’m not very employable. I will never pay the debts off in my lifetime, I can only manage them.”

Shelley continued: “We know that there are people in their 80s or 90s dying with debt – they are paying back two or three times what they borrowed. We can help people stop and plan, get on the right path and make better decisions.”