Rising numbers of referrals and budget cuts mean some young people in the county are waiting more than a year for treatment by child and adolescent mental health services (CAMHS).

Services are now so stretched, a group of young people from West Cumbria set up a campaign to train school pupils in ‘mental health first aid’. It was set up following a £5,000 grant from the #iwill Fund in 2017 and another in 2018.

Frustrated by the waiting times for mental health services, the We Will group campaigns for more understanding and skilled support for young people suffering mental ill health.

Supported by the Ewanrigg Local Trust, the group of 18 teenagers, aged between 14 and 18, live in Maryport, Workington and Cockermouth. They attend Netherhall, Cockermouth, Workington Academy and Carlisle College. Another 30 members are part of the youth mental health groups in schools.

In 2017, the Education Policy Institute revealed that Cumbria is in the top 10 worst areas for waiting times, with young people having to wait 84 days on average to receive mental health treatment.

We Will member, Rebecca Woods, said: “We’re hearing of young people who have attempted suicide whose follow up appointment with mental health services comes over six months later. How can this be acceptable? I won’t stop campaigning until the system is working as it should be and until we have stopped young people in crisis having to suffer for months on their own.”

As result of the campaign, the teenagers have conducted 18 months of research gathering information from MPs, GPs, social workers, CAMHS, commissioners, teachers, families and their peers. They have been trained in Youth Mental Health First Aid and have encouraged over 300 other people to take up the training.

The group have worked within their schools and communities to make practical changes and made several short award nominated films to highlight the issues. BOY was launched as part of Mental Health Awareness Week in May. The film was shown in secondary schools and businesses throughout the week and has enjoyed great success on social media. A campaign film was created to explain why they are fighting for change and why they are demanding urgent action.

Billy Robinson, another member of We Will, said: “We welcome the extra 2.3 billion pounds for mental health announced recently by the NHS but we have no confidence that it will make any real difference to young people here in West Cumbria in the next ten years. We are demanding immediate improvements for our most vulnerable young people.”

The campaign has received significant local, national and international media attention. They have also won several awards for their campaign work. 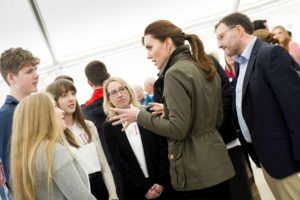 The young mental health campaigners met Prince William and Kate Middleton when the royal couple visited Keswick in June. They also went to the House of Lords in July to receive a Diana Award, the most prestigious accolade that a young person can receive for their social action or humanitarian work.

The We Will teens know they can’t fix the national gap in mental health services for their age group, but they are using their knowledge, energy and fury to highlight the urgency of the need.