One in 20 people with HIV are unaware they have it and although cases are low in Cumbria, 60% of people with the disease are diagnosed late.

Set up in 2003, Eyes Open is a regional group of health workers who raise awareness of HIV, challenge stigma and pool resources to widen and strengthen the impact of work at both local and regional levels regarding HIV/AIDS. 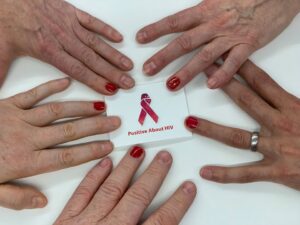 Working across the North East and Cumbria in schools, hospitals, community settings, £2,250 from the Cumbria Fund supported the campaign ‘Undetectable = Untransmittable’ (U=U).

The U=U campaign raised awareness by getting people talking and educated them about what U=U means today for people living with HIV and to remove the stigma and discrimination surrounding HIV that still exist today.

Christine Stewart, Treasurer, said: “When people with HIV were diagnosed in the early years of the disease, it was thought to be a death sentence. There are now medications that can treat HIV, which allows people to live a near normal life expectancy and is so different to the life expectancy people were told in the 80’s and early 90’s, but still today there is a lot of ignorance, stigma and discrimination towards people living with HIV.

“We received several messages from people living with HIV in Cumbria who hadn’t disclosed their status to anyone, but due to the U=U campaign, felt they had the confidence to confide in family and friends, which was amazing to hear, because everyone living with a health condition, should have support around them.”

One college student said: “After seeing your information, I have booked myself in for a HIV test, totally terrified, but it’s better to know so I can live a healthy life and so I can also project my partner”, and another said: “I didn’t realise that if you are on effective treatment, that you can no longer pass on HIV, everyone should know this message! U=U!”

I didn’t realise that if you are on effective treatment, that you can no longer pass on HIV, everyone should know this message! U=U!”

The campaign brought people from the local community, those living with HIV, volunteers and individuals in the North East and Cumbria region. It also supported the Government’s campaign to end all new HIV transmissions by 2030.

The online campaign used social media and online meetings to interact with 12,000 people. Adverts on Pride, CFM and Metro Radio reached 1,915,000 people and 66 volunteers supported the campaign who are living with HIV or affected by HIV.

Through the support it has had with funding and with its steering group and volunteers, it extended the campaign to include World Aids Day on 1st December 2021. Local officials attended the NHS official World Aids Day breakfast with Cumbria’s Director of Public Health Colin Cox to talk about HIV in the region.

Eyes Open continues to help people increase their confidence and self-esteem, reduced self-stigma associated with living with HIV. Referrals are received from NHS staff working at the Derwent Clinic in Workington and The Solway Clinic in Carlisle where Cumbrian patients receive their treatment for HIV.