Many households in Eden and South Lakeland are reliant on jobs in the farming and tourism industry, which are often low paid or on zero-hour contracts, and average household incomes are below the national figure.

People who struggle financially often turn to high interest lenders for help and end up in more debt. 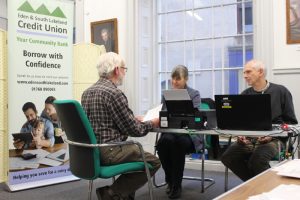 EdenSave Credit Union and South Lakeland Credit Union merged to share resources and be able to support more people who are financially disadvantaged by providing fair loans and a simple way of saving.

Eden and South Lakeland Credit Union received £3,000 from the Cumbria Fund and the Russell Armer Fund to establish an outreach office in Kendal town centre. Following a period based at Sandylands Methodist Church, it moved to a more accessible location at Kendal Town Hall in November 2017 and is supported by ten volunteers.

One of the newest volunteers to start working with the credit union is Wendy Walker. She said: “I started work as one of the front office team a few weeks ago, and even though I am no money expert, the training gave me confidence and I have enjoyed the face-to-face contact with the public. We nearly always have time for a chat, and the volunteers behind the scenes can give expert advice on saving and borrowing.”

The credit union aims to fill the gap between mainstream lenders and high cost finance providers such as pay day loan companies or doorstep lenders. Members who are unable to get credit from the mainstream banks are considered for loans. Currently, the union has more than 600 members who are currently saving more than £400,000 and borrowing approximately £144,000 between them.

“This is good news for people struggling to raise finance who might otherwise turn to high cost sources like money-lenders. They are often surprised by the competitive rates on offer and choose one of our loans, knowing the interest paid on the loan goes to help those who find credit harder to come by.”

Since receiving the funding, Eden and South Lakeland Credit Union has been able to expand, with over 50 volunteers now involved, and service points in Alston, Kendal and Penrith.