Cumbria has a rich artistic and cultural heritage, from poets and authors to painters and musicians.

Some of the Foundation’s funds aim to contribute to building a healthy and flourishing arts and culture sector in Cumbria.

15 year old gifted musician Tiegan Lowthian from Kirkby Thore has received £3,220 from two funds within the Foundation since 2019.

Her first grant was from the Cumbria Cultural Fund, established in 2005 by the late Mary Burkett OBE to provide funding for activities, which promote excellence in the artistic and intellectual life of the county. The money contributed towards travel expenses as Tiegan was travelling to Manchester every other weekend for music lessons in preparation for her Grade 8 violin exam. The lessons are covered by the Governments Music and Dance Scheme but excludes travel costs.

Tiegan said: “I want to be a musician. I have been playing the violin for eight years, the piano six years and the trombone four years. I perform with school, at events locally, nationally and abroad. I have played with the National Children’s Orchestra, Westmorland Youth Orchestra, Cumbria Youth Orchestra and Yorchestra. I have a violin on loan from the Tompkins Tate Trust and a trombone on loan from school.”

Now that Tiegan was playing trombone at the Royal College of Northern Music (RNCM) every Saturday, she needed a better quality instrument and her most recent grant in December last year from the Cumbria Young People’s Fund paid for one, which she received on Christmas Eve.

She said: “Living in Cumbria makes it really expensive to access good quality music activities and my mum spends a lot of money and time driving me around the country so I can attend. This doesn’t leave any money for big expenses like this.

Tiegan has since progressed with her studies and achieved a ABRSM Grade 7 Trombone Certificate.

“The grant has enabled me to continue to improve musically, to successfully take exams, audition for orchestras and perform in concerts. Without the grant, I also wouldn’t be going on tour this summer with the Halle Youth Orchestra. I am studying music A level for the next two years and I will play the trombone in the performance component. After A levels, I would like to study music at conservatoire.” 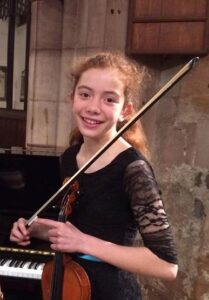 Tiegan aims to be employed by an orchestra, an industry where state-educated people from the North of England are a minority, she continues: “I’m so proud and I couldn’t do any of this without a quality instrument.”

The Cumbria Young People’s Fund was created through an anonymous legacy gift of £1.2m, the donor was a retired teacher who cared passionately about helping young people. The Fund supports applications which will make a difference to the lives of disadvantaged young people in Cumbria by supporting study or vocational training.

“I hope I inspire other people at school to play and I help the young children at orchestra and in clubs,” said Tiegan.