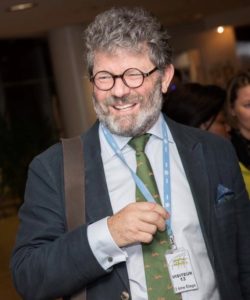 Chris was brought up in Ambleside and Grasmere, and educated at Heversham Grammar School.

He returned to Cumbria in 2013 after a 30 year career in the Army focusing on intelligence support to military operations, and eight years as a risk management consultant based in London. As a consultant, much of his time was spent overseas supporting governments and international organisations operating in challenging environments. He took a leading role in the promotion of professional and human rights standards for the UK and global armed security industries, for which he was awarded an OBE.

Since returning to Cumbria, Chris has been involved in the leadership of a number of charities including the Army Benevolent Fund, Cumbria Scouts and Patterdale Mountain Rescue. He is a Trustee for the Ambleside-based Armitt Museum and Library, and sat as a Magistrate on the North and West Cumbria Bench. Chris serves as a Deputy Lieutenant for the county.

Chris is a keen sailor, skier and fell-walker, and lives with his partner, Francesca, and their two young children, Hugo and Allegra, in Kentmere in the South Lakes.