A new emergency relief fund has been established thanks to a donation from the herdyfund and Cumbria Community Foundation to relieve household hardship after the Beast from the East and Storm Emma hit eastern parts of the county. 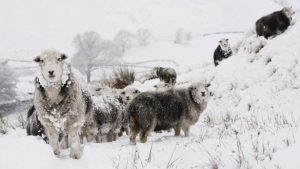 Farms and communities in and around Alston Moor, Bewcastle, the East Fellside and Greenhead have suffered catastrophic losses during Storm Emma and have been very badly affected by the snow with sheep buried in snow drifts, uncollected milk and damage to field boundaries. Additional costs faced by farmers include carcass collection, uninsured losses of livestock and the likelihood of higher lamb losses from ewes that spent some days under snow drifts.

The purpose of the Storm Emma Relief Fund, administered by the Farmer Network is not to directly compensate for the losses but to address household hardship that has occurred as a direct consequence of this extreme weather event.

Adam Day, Managing Director at the Farmer Network, said: “The snowstorm proved to be, in the words of many farmers, “the worst in living memory”. With the news that the government could offer no further support, we were delighted to be approached by the Community Foundation to provide assistance. The Farmer Network is now geared up to help the farming community in applying to this emergency fund. Although the fund cannot directly compensate for losses, it can provide support for households who suffered as a result of the extreme weather conditions.”

Spencer Hannah, Director of The Herdy Company, said: “We were saddened to hear the plight of these local farmers. One of the reasons why the herdyfund was set up was to help at times like these. We have spent time with some of the farmers who were affected by the harsh weather conditions and while their approach to the crisis was stoic, it was clear many were devastated and it’s vital we support these farmers when they need it most.”

The fund has the support of Rory Stewart MP. He said: “I got in touch with Cumbria Community Foundation as soon as it became apparent that the effects of Storm Emma were disproportionate in certain farming communities where a loss of stock, damage to infrastructure, and use of resources were severe and will impact on some of our small family farms at the most critical time in the farming calendar.”

Awards will typically range between £250 and £500 but in exceptional circumstances higher awards may be considered. If you have been badly affected by the snow and have costs that cannot be met by insurance, please call the Farmer Network on 01768 868615. You do not need to be a member of the Farmer Network to apply. The application will be as straightforward as possible, and Officers will guide you through the process.

The Prince’s Countryside Fund is helping to cover the administration costs of the Farmer Network thereby ensuring as much money as possible goes to affected communities.

If you are not a farmer but have suffered hardship, please contact Gary Higgs at Cumbria Community Foundation on 01900 825760.

If you would like to donate to the fund, an online fundraising page has been created, alternatively call Cumbria Community Foundation on 01900 825760.