I wouldn’t go so far as to say there’s a “structure” to my cycling endeavours, but the last couple of years have been planned around two major rides. Though if a proper cycling coach were to check on my approach and methods, I’m sure there’d be a lot of head shaking. Whatever, it’s worked so far. Just about.

First there’s a May offensive ahead of the Fred Whitton ride/ordeal/torture. Having now completed this twice, I wish to announce that I have officially retired from future Freds. My wife has asked me to make this clear.

Then there’s a slight easing off, with the exception of July’s Virgin Money ride around Northumberland, before August and the thoroughly splendid but taxing Inishowen 100 in beautiful wild, windy and rather gradient abundant Donegal. The final piece of the Moss Masterplan is to hope that whatever fitness accrued lingers into September and the Rivers Ride. After which things settle down and I pootle through the winter months at a more leisurely pace.

The Inishowen ride features a range of bumpy bits. Up and around Malin Head, Ireland’s northernmost point, is simply stunning but the two bruisers are the seemingly never ending climb out of Kinego Bay, which comes after about 75 miles, but way before that, the very first climb of the day, is the stuff of local legend. 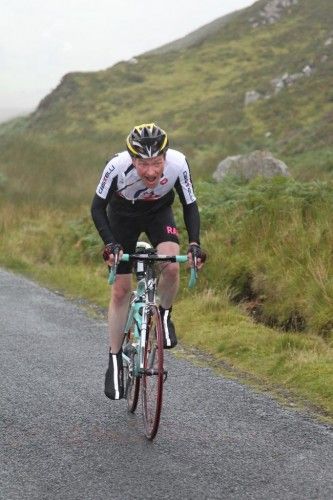 It is known as “The Gap”. The full title is the Gap of Mamore. It’s a mountain pass. The sportive tackles it from the southern side – which is dead straight and dead steep. You can see every bit of pain coming your way. I’m told it peaks at around one in three. Although it comes after only fifteen miles, a fair chunk of the field will be pushing up the final yards. They always are. This was the fifth, or maybe sixth, time I’ve ridden the event. This year a sizeable chunk of Atlantic Ocean was turned into ominous dark cloud and further transformed into lashing Donegal rain at precisely the moment I reached the top. The equally steep, but horribly winding descent was so treacherous that many opted to walk downhill as well.

It’s an incredibly characterful and friendly ride with local clubs well represented and mighty craic. I can heartily recommend. Derry based Foyle Cycling club are the organisers. They’re a fine body of folk.

After the legs had rested for a day or three and became my own again, I then mounted a couple of assaults on The Gap from the northern side. That’s the steep and windy approach. The one with a grotto near the top. Believe me, you will be in need of prayer at this point. The reason for this choice of route was by way of preparation for my Rivers Ride nemesis, Honister. The distance climbed is similar and the gradient slightly steeper, according to my Garmin. For some reason I can manage The Gap, either straight or twisty. I can manage Honister from Borrowdale. But Honister from Buttermere. Nope. The steep bit is just too steep for my old legs. Always time for a short walk and push. So will my Irish training have paid off? …or will it have been negated by my post ride rehydration strategy: Guinness.

See you in Keswick! Slange.