Last Saturday after ten months suspended from my garage ceiling (see last blog) I took my bike off the hook and placed it gently back on its two wheels. Shamefully I had put it there on the night of last year’s Rivers Ride and left it there like a forlorn, dangly monument to a fitter, more agile past. Last year’s Rivers Ride was tackled in monsoon conditions and amazingly, the bike started dripping water from its front forks. Now this was either residual water from Whinlatter last September  or genuine cycle tears because it knew that I was just about to sit on it for 40 miles.

I had signed up to do the Rivers Ride Relay which was four teams doing each of the rides and passing on a bottle of Cumberland Ale as the baton. As you may know I am the pioneer of Extreme Cycling. Now, this new sporting concept (which may become an Olympic Sport in future years) isn’t an endurance event of many hundreds of miles in difficult conditions but is based on overweight ‘cyclists’ doing no cycling for the vast majority of the year then jumping on his/her bike to do a ride of 40/60 or 80 miles up and down hills in a oner.

I was doing the ride with fellow blogger Ian Curwen and Tom Foster a Director at Sellafield.  Just so the Cycling Gods (who for the ill-informed are called Chopper, Grifter and Budgie) could snigger a little louder it was scheduled on one of the hottest days of the year and we were doing the just after lunch slot. Oh joy! The physicists amongst you will be aware of the formula that dictates that 40 miles +slopes + 26 degrees + clinical obesity = comedy cycling + breathing that you can be arrested for. I’d also forgotten to have something substantial to eat (unless Bradley Wiggins pre Tour meal of choice is a bowl of Clusters in which case I was well prepared.) We had also managed to persuade/dupe a colleague called Karl Connor to drive us and our bikes  through. This had the double benefit of allowing us the opportunity to partake in several pints afterwards in Keswick which was the carrot that I needed. 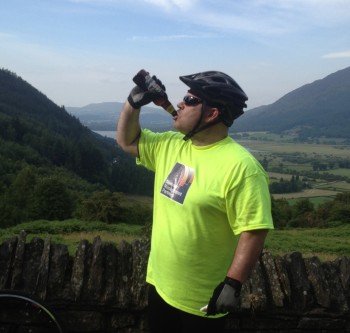 The ride itself was actually (and surprisingly) uneventful which for a blogger is really disappointing. Normally on my occasional forays into the world of cycling I fall off, get bitten by dogs, bricked by feral teenagers or slip in dog poo. On Saturday I cruised effortlessly at 1.3 miles per hour in my bright yellow t-shirt (see photo) looking like Bungle off Rainbow and managed the route pretty well. We then went to the pub and had some chips. Grand! I did, of course,  get my usual pitiful/sniggery/is that fat fella really on a bike looks from the fitter cycling demographic but I did check out their calf muscles and mine were bigger and more defined.   In my last blog I told you that I would be reporting on my ‘marginal gains’ Over the last few weeks my legs have been bitten to pieces by midges.

The resultant scratching has meant that both lower legs have been stripped of quite a lot of hair. I do believe the resultant weight loss and associated efficiency has raised my average speed from 1.2 mph to 1.3 mph.  Result!

So – has the day out ignited my love of cycling? No. Will I commit to a training regime of x number of  miles per week leading up until September? No. Will I regret it in September? Yes – just like last year and the year before.   What is it about me and never learning from experience? Until next time..