The Furness Future Leaders Academy aims to inspire year five students to plan their own future and help them hone leadership, team-work and communication skills that will be in strong demand across the Furness industrial landscape in years to come.

The leadership academy was founded by Barrow and Furness MP, John Woodcock. Based at Furness College over three-weeks, children from 22 schools across the constituency worked with professionals from industry and across the community to create a big campaign and deliver that campaign. 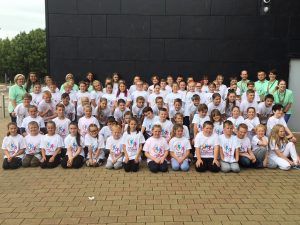 A key theme that had been explored was plastic waste in the ocean for which they created their own promotional materials and social media channels. The campaign ‘think blue, go green’ was developed and launched by the children. As a part of the research, they visited the town hall to take their campaign to the mayor.

Oxley Developments of Ulverston, worked with the children to produce campaign logos and publicity material. The company then decided to roll out their own green initiatives internally. The student’s campaign posters were placed in the business, and each member of staff received a refillable metal water bottle; plastic bottles and cups were replaced with glass items and milk delivered in plastic bottles.

Jayne Moorby, Oxley Developments, said “Every year we see youngsters grow in confidence and ability through the academy. The children gain an important sense of entitlement that they can achieve at a high level and an awareness of opportunities open to them in their future. From a business perspective, we’re investing in people who will become the future leaders of our organisation. The academy also enriches our local community by focusing on a campaign that the youngsters champion. The programme is professional, well organised and receives high level local support. It is a great example of the public and private sectors working together.”

Catherine Webb, Project Coordinator at Cumbria CVS, said: “The grant from the Foundation was important in helping to lever in funding from other sources, such as BBC Children in Need and other charitable trusts.

“The academy is designed to instil more confidence and self-belief in youngsters before they reach secondary education. Students are nominated by teachers. A typical child is one who shows early leadership potential and/or is coasting academically and, therefore, could do with a specially tailored programme to improve their engagement in learning.”