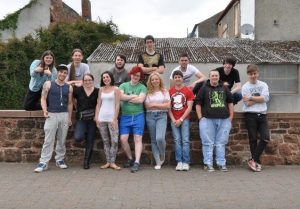 A Wigton charity working with some of the most disengaged and hardest to reach young people is giving them structure in their lives by teaching them skills to help towards future employment.

North Allerdale Development Trust (NADT), based in the Market Hall, received £12,150 from the Cumberland Educational Foundation, the Solway Fund and the Liddle Thomson Community First Fund towards its Upcycle project, which gives young people the job of creating small items of furniture and home goods to sell, with all the profit going back into the project for materials and tools.

It helps youngsters tackle their issues so that they are more likely to engage in education and less likely turn to crime or re-offend. 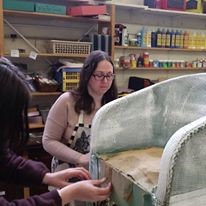 The eight-week sessions run 6 times a year and more than 205 youngsters have benefited to date. Many of them have been referred from local schools and organisations like Youth Offenders and local job centres. The project provides a hands-on approach to learning through upcycling furniture and creating new items. As well as the practical aspects, they learn skills such as time management, interaction, budgeting, customer service, and teamwork, all of which are essential to getting back to education, training, or employment.

One young girl who, due to family and other issues, had been relocated to the county, was referred through Youth Offenders. She had refused to engage with her local Youth Offenders team and the Upcycle project was a last resort.

Initially she was put on placement for one day a week and through extensive one to one work she started attending the project full time.

She tackled her feelings of isolation by making friends with others on the project, and her confidence and self-esteem grew. She finished the project and enrolled at college on a painting and decorating course.

Youth worker, Clare Stabler, said: “Another student who had been in care since the age of 4 due to domestic abuse, from which their mother suffered with poor mental health. The student had returned to their mother 9 months prior to joining us. A number of managed moves had been unsuccessful and on joining us the student had fell completely out of education and had no intention of re-entering education. Initially the student was with us one day a week for an eight week cycle,however at the end of the eight week cycle the student  had re-engaged with education one day a week. The student is working hard to catch up with education preparing to take GCSE’s in the near future.” 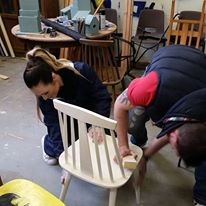 Clare, continued: “Having this funding allows the youngsters to gain extra skills and experiment with their imaginations on how they upcycle the furniture.

“As a result of this funding we have been able to engage with more schools within
Allerdale.Before the funding we were engaged with five secondary schools, since acquiring the funding we have been able to engage with four new schools and also have built stronger relationships with alternative provisions such as WCLC and Childrens Services. Due to an uptake in places we expanded from three days a week to four days on the Upcycle Project and also introduced a new project one day a week with the same concept but using Media as the engagement tool.”

The project works in partnership with Free 4 All, a local community recycling group, who donates furniture and offers a workshop. It also works alongside the Men in Sheds group with the men going along and providing templates for items for the Upcycle Project.