West Cumbria Carers supports almost 2,000 carers across Allerdale and Copeland. 300 are aged between 5 and 18, who look after a family member who is unwell or disabled.

With so many adult responsibilities, young carers often miss out on opportunities that other children have to play and learn. They can become isolated, with no relief from the pressures at home, and no chance to enjoy a normal childhood.

Young carers can feel very lonely during the summer holidays with time taken up caring for loved ones and less time to relax. West Cumbria Carers runs an annual young carers summer respite programme and a grant of £1,500 from the Shepley Group Fund and the Cumberland Building Society Charitable Foundation enabled over 50 children and young people to take a break from the caring duties. 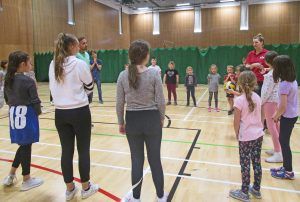 Jane Hanlon-McNab, Support Worker at West Cumbria Carers, said: “Robert* is 15 and lives with his younger brother and father who has COPD and mobility problems. West Cumbria Carers has been supporting Robert since he was 14 after he was referred by Barnardo’s.

“Robert was struggling with school, home-life and had anger management issues, particularly with his brother. Through the young carers project, Robert has had one to one support and has attended several social activities, including the summer respite programme.

“Over the past 18 months, Robert has grown in confidence and his behaviour has changed from aggression towards others, to becoming a kind, caring and considerate young man. He still struggles academically at school but has enjoyed the physical challenges over the summer; engaging in every sport offered with enthusiasm. The project has had a significant impact in helping him to understand that keeping fit and healthy is very important for his future chosen career in the army and he is highly motivated to continue with regular exercise.

“Robert has developed a real empathy for his fellow carers and was very supportive of younger participants who gravitated towards him, seeing him as a positive role model. He also comfortably made new friends within his peer group; friendships that have been maintained outside of the young carers project.”

*name has been changed.