Thanks to a grant of £15,000 from the Cumbria Fund and Holehird Trust over three years, Growing Well has been able to replace essential gardening items, provide new volunteer safety equipment and to update their onsite storage facilities. 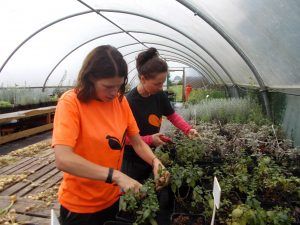 Growing Well is an organic farm based mental health charity near Kendal. Operating on 6 acres of land, it has developed the site incrementally to create a safe supportive working environment that fosters mental health recovery. Since becoming established in 2004, more than 500 people have been supported.

Meaningful physical activity is underpinned by structured mental health support focused on recovery and a return to work, training or further unsupported volunteering. Participants, aged 18-80 are supported in their recovery by taking part in activities such as cultivating and picking crops, preparing meals and working in the office on a weekly basis, sometimes over years, to help rebuild a sense of purpose, to engage in meaningful and fulfilling activity and build hope for the future. there are also opportunities to study for horticultural qualifications.

The social enterprise champions the ethos that engagement with the natural environment, through the work of food production within a community of supportive people, has transformative powers.  Produce grown on site is sold to Cropsharers or to partner commercial organisations, such as Westmorland Ltd. 15 tonnes of crops are grown each year and 100 local families are supplied.

Paul from Barrow is on the autistic spectrum and suffers from anxiety. He previously worked as a carer but had to leave work owing to personal issues and the stress of working with difficult patients, many having come from prison. He was referred to Growing Well by his GP.
He said: “I thought it sounded OK and I liked gardening. The autism diagnosis helped explain a few things – I don’t have any empathy or get emotional.”

At first, he was quiet and shy, but soon started to feel better about himself. Paul joined the return to work group which helped to build his confidence and made him feel comfortable talking about his autism. He applied for a carer’s role in a nursing home in Ulverston, and with help preparing for the interview, got the job.

Paul said: “I’ve been there six weeks now, working 23 hours a week. I told them about my autism and they were very supportive. I still plan to come back to Growing Well when I’m not working – it’s nice to see the people I work with as I’ve made friends.”