Cumbria Community Foundation provides high quality philanthropic services (grant making) to a wide range of public, corporate and individual donors. It is an award-winning charity that has distributed more than £41M in grant aid to community groups and individuals throughout Cumbria.

We are currently looking to recruit an experienced Media & Content Officer to support our Communications Manager and wider team in promoting the organisation by raising its profile and awareness within the local community.

If you are a skilled copy writer who can produce interesting and engaging content for all of our media platforms, want to work with a highly respected organisation in a challenging but interesting role then download the job description and application form.

For an informal discussion about the role, please contact Annalee Holliday on 01900 825760

The post is based at our offices in Dovenby near Cockermouth.

Charitable causes in and around the Barrow area have received a share of more than £6,000 to provide support to some of the most disadvantaged people across the peninsular.

5 community groups and 1 young person received a share of the funds at Cumbria Community Foundation’s recent Barrow grants panel. The funding supported activities including training mentors for autistic adults, a summer sailing trip and updating kitchen equipment in a nursery.

Furness Carers received £1,000 from Barrow Community Trust Fund to provide transport for Young Carers to access activities at Hindpool Community Centre to give them a break from their caring roles. The charity’s Young Carers project offers respite, one-to-one support, youth club, advocacy and holiday activities to over 200 youngsters aged from 5 – 18 and many are unable to afford the cost of travelling to the centre, where the activities take place.

Craig Backhouse, Chief Executive Officer, Furness Carers, said: “We are very successful in supporting Young Carers through our activities programmes which are funded from various grant giving trusts and donations. However we are getting more and more requests from families to provide additional transport getting Young Carers safely to and from these activities. This grant will allow us to support those Young Carers who are most in need to give them some much needed respite from their caring role.”

The Triple A Project (All About Autism) provides specialist support for people with autism and their families as well as training and support for organisations and professionals in understanding the condition. It received £2,377 from the Fryer Grassroots Grants Fund and Barrow Community Trust Fund to enable Triple A Navigators to work alongside autistic adults in a mentoring capacity to help them develop the skills and emotional resilience to become an active in their communities.

Helen Storey, Chief Executive Officer, said: “There is an increasing number of autistic adults approaching Triple A who have difficulty navigating a variety of life situations – often made worse by misunderstandings.  This grant will have a significant impact and increase the number of individuals we will be able to engage with in the area, alongside raising general awareness of the specific issues and challenges faced.”

Ellen Clements, Grants and Donor Services at Cumbria Community Foundation, said: “Organisations like Furness Carers and the Triple A Project are essential in tackling issues in the local community and with help from the funds managed by the Foundation they can make a real difference.”

Lakeland Rowing Club is celebrating the addition of two new sculling boats to its fleet thanks to the generous support from the United Utilities Legacy Fund, administered by the Foundation. 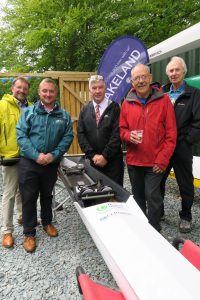 On Wednesday 1st August 2018, Lakeland Rowing Club named and launched the first of the new boats from its new site on the Isthmus, near Keswick. The boat was named named ‘John Knox’ after the club’s founder member and president John Knox, who has developed the club since it was founded in April 2007. The club has now 98 members including 32 junior members from Keswick School and Cockermouth School and continues to grow.

Chris Pratt, Chairman of Lakeland Rowing Club, said: “Thank you to United Utilities for its generous funding of the new boats. Ethusiastic juniors, whether training or competing, will be testament enough to the benefits of the grant.”

Andy Beeforth, Chief Executive of Cumbria Community Foundation, commented: “The club is going from strength to strength and due to its popularity with local youngsters and its ever-growing junior section, it’s fantastic United Utilities have supported this project to purchase the additional boats so that more young people can develop their rowing skills and compete more regularly in the sport.” 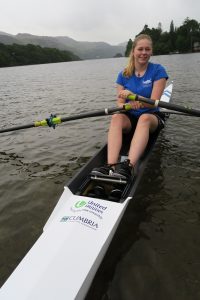 Karen Blackley and her daughter, recent Learn to Row students of new of Lakeland Rowing Club, said: “Joining LRC has given me the opportunity at 50+ to learn a new skill. Whilst I have found it very challenging at times, the sense of satisfaction when it goes well is really rewarding. This could not have been achieved without the dedication and support of others at the club, who have given up their time to help me.

“My daughter also rows and my aim is one day for us to row together in a double. There are few sports where you can partake together as a family. Therefore what can be better than living in the Lakes and getting to enjoy the landscape from a unique view point?!”

To find out more about the United Utilities Legacy Fund see our grants page.