When Danny Ewin was just 16, he suffered horrific multiple injuries in a road accident. The teenager, from Eden, was returning home after visiting his great-grandmother, when his motorbike was in a collision with a car. 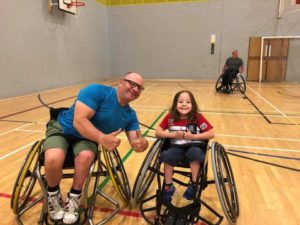 Danny spent many weeks in hospital and suffered a complete T6 spinal cord injury and paraplegia -he has no movement below his chest and is now confined to a wheelchair. Six months after the accident, he was introduced to Cumbria Wheelchair Sports Club (CWSC). He was intrigued and excited by what he saw, even though he felt that he was wasting everybody’s time because he was severely disabled. Danny sat in a sports chair and started playing basketball. He liked it instantly, but his biggest fear of all was meeting other people with disabilities – especially those with learning disabilities who he felt he wouldn’t be able to cope with.

Danny became one of the Club’s star players, going on to play in the national league. He also coaches the development and junior basketball teams, the boccia sessions, and runs some of the table cricket provision.

Described as a ‘tear away’ by his old school teacher, Danny now says: “I have realised that there are people in this world that are less fortunate then me – it is my mission now to inspire other accident victims to realise that disability is not about being suddenly unable to do things, but is rather all about the abilities we still have inside to achieve just as much as those without disabilities can.”

Each year, CWSC transforms the lives of people like Danny by their 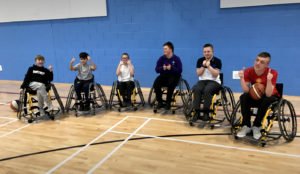 participation in sport. The Club was set up in 2011 by Chairman Ray McBride because his disabled grandson had to travel to Newcastle to take part in sport. It now has more than 200 members and is used by adults and children at its hubs in Carlisle, Penrith, Kendal and Whitehaven.

A grant of £8,130 from the Cumbria Fund in 2018 covered the cost of 12 months court hire, providing regular sports activity for 239 people with disabilities. As a result of the funding, 464 sessions of wheelchair basketball and 150 sessions of Boccia were delivered across the county. 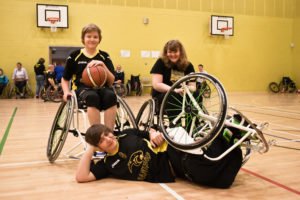 Many players have reported that they feel fitter and better in themselves because of getting active regularly. Self-esteem has also improved over the last year, with many players reporting that they feel more confident in their daily lives and less defined by their disability. Social isolation is clearly reduced for all participating players, since all wheelchair sport carries with it a very big element of teamwork.

Ray McBride said: “As a small wheelchair sports club, court hire represents one of the biggest core costs of our operation. Our ability to cover these costs has meant that we can continue to make positive differences in the lives of many people with disabilities across the county. Such positive differences have led to improvements in health and wellbeing that have been felt by all people who have participated on court this year.”

The club founded UKWB in 2019, an alternative wheelchair basketball organisation that allows everyone to play in a competitive league, including younger players, which now has more than 400 members.