Older people in and around Aspatria are singing at the top of their voices, thanks to £600 from the Lawrence Fund.

The grant enabled professional singing tutors to deliver the Singing for Wellbeing project, a bi-monthly 2-hour workshop held at West Street Surgery in Aspatria. It is supported by Age UK West Cumbria and 2 volunteers, one in her 80s and another in her 60s. 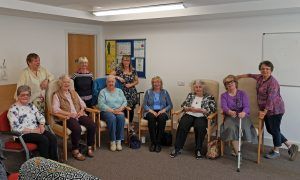 The project promotes healthy ageing by providing therapeutic music-making using the voice. Everyone who takes part feels uplifted, while getting together in a group counteracts social isolation, promotes general wellbeing and positive mental health, and helps prevent dementia.

The group made up of 14 regulars who are mainly over 65, enjoy the singing sessions. Activities are also incorporated into the singing, for example, passing bean bags around the group while singing, and physical movements linked to the music and words, such as clapping hands or stomping feet.

The group gave one 87 year old gentleman, who lives alone on a farm, a reason to get out the house. He recently fell and broke his wrist but still insists on taking the stairs, rather than the lift, and attending the group has supported his continued mobility. He also enjoys the cuppa and biscuits, which are a big part of the session for him.

Hazel Stewart, Community Connections Project Worker at Age UK, said: “The group brings out positivity in the community and members are keen to age as well as they can, and stay as active in their communities for as long as possible. It offers as social support network as several members have had surgeries and/or cancer treatments, and have felt supported by their friends in the group.”