Arnside Sailing Club has a thriving cadet programme to be proud of, offering several sessions over the summer holidays.

The cadet programme was launched in 2016 and aimed at children aged 7 to 15 years old. The club began by buying some second-hand dinghies well suited to youngsters in the age group and launching a programme of cadet training for youngsters from the village. Being situated on the estuary of the River Kent, word soon spread among villagers and there was a good influx of youngsters. 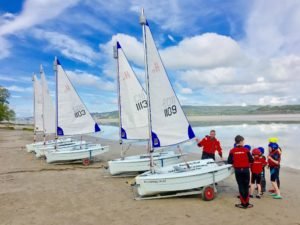 A Topaz 12 catamaran was purchased in 2017, thanks to a £6,000 grant from the Community Foundation, which was suitable for children aged 8 to 14. In 2018, more than 60 young people learned how to sail, helping to develop independence, confidence, resilience, teamwork and communication skills.

Many of the young members have continued the cadet programme but the club only had three boats suitable for older teenagers, offering a capacity of five. A further grant of £4,750 from The Dulverton Trust Fund and the Cumbria Grassroots Fund in 2019 meant it could purchase a Topaz 14  catamaran, suitable for older teenagers, enabling them to continue sailing with the club as they grow older and progress their skills.

Alasdair Simpson, Secretary, said: “Sailing gives teenagers a chance to enjoy Arnside’s outside marine environment. It helps them gain confidence and independence. It develops life-skills such as determination, teamwork and problem solving. As a sport it helps improve health. As a social activity it improves mental health. It also offers a sense of achievement. 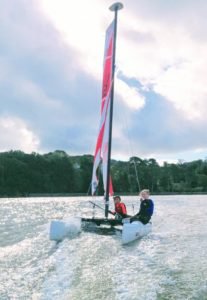 The cadet programme is made up of low tide sessions at Arnside when the water is shallow enough to stand up in and high tide sessions for more experienced cadets. To overcome tidal restraints at Arnside and increase activity on the water, the club introduced sailing courses, including a women’s sailing course at nearby Killington Lake. It also purchased a second lightweight safety boat to enable the operation of sessions when high tide heights are low and to act as a secondary safety boat when sailing numbers are high.

One parent said: “The cadet programme has given the Arnside community so much joy as we gather together most weekends throughout the summer and share the pleasure of sailing. Parents have enjoyed watching the children learn and thrive out on the estuary and the children have had so much fun as well as challenging themselves and learning valuable skills that will benefit them physically and mentally. We can see how much their confidence has grown. The catamarans are a real asset to the club and have enabled the more experienced cadets to push their boundaries and enjoy the thrill of a different experience to dingy sailing such as stability, resistance, speed and confidence.” 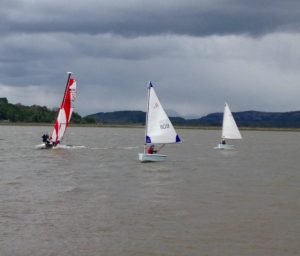 Arnside Sailing Club has seen a significant increase in membership in the last four years. The introduction of the cadet programme, adult training and new club boats have made it far easier to start sailing with the club and they have gone from strength to strength. In 2019 it received the Royal Yachting Association and Yachts & Yachting Club of the Year Award.

Alasdair said: “We have increased our overall membership numbers from 139 to 151. Over a 25-year life we anticipate the new catamaran would be used by 200 people.

“We are also looking at introducing other water sports at Arnside, including paddle boarding and canoeing, so that we can offer families and children something on low tide days when the water is very shallow.”