Cumbria Wheelchair Sports Club was set up in 2011 by Chairman Ray McBride because his grandson had to travel to Newcastle if he wanted to take part in sport.

Based in Carlisle, the club gives people access to sport regardless of their disadvantages, helping them to improve their health and wellbeing and overcome social exclusion.  It now has hundreds of members and offers wheelchair tennis, football, boccia and ice curling as well as basketball with satellite sports hubs in Whitehaven, Carlisle, Penrith and Kendal.

A grant of £2,000 from the Quarry Hill Grassroots Fund contributed towards coaching costs and court hire to provide powerchair football at Carlisle Youth Zone over 50 weeks. Similar to ordinary football matches, the game is played by two teams of differently-abled athletes using special footguards attached to powered wheelchairs to kick a large ball.

The sessions were held for one and a half hours every Sunday and open to up to 20 people of all abilities so siblings and friends could join in.

Ray said: “Some of the children had severe physical and learning disabilities. Football powerchairs are not easy to use, even after instruction, so the fact that they could handle the chairs and play in the 4-aside matches gave them (and their families) a very real sense of personal achievement. The project also helped the young people not only to appreciate the challenges that those with disabilities face, but also to tolerate those with disabilities more, thus leading to better integration. 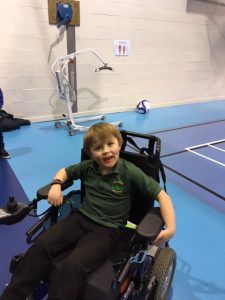 8 year old J (photo) has learning disabilities and behavioural issues that make it difficult for him to socialise with others. He often resorts to bad behaviour if he feels that he is being pressured or if someone expresses an opinion different to his. The coach and volunteers worked hard, often on a one-to-one basis with him to help him realise that his behaviour was getting in the way of him being able to enjoy himself.

J eventually became so comfortable around powerchair football that he began to assist the coach with those with more profoud disabilities. His behaviour improved, and his new enthusiasm and love for the sport has become a real inspiration to the other players.

Ray continued: “Perhaps most importantly of all, wheelchair football, as a medium, has transformed the lives of young people by allowing them to come together with a shared interest and to make new friends. It has helped reduce social isolation, and helped more young people to form valuable and supportive external networks. Skills learned in the sporting arena will be taken away and applied to the challenges facing the young people in their everyday lives.”

The youngsters at Carlisle Youth Zone listed their favourite activity  as wheelchair football and have asked to be able to continue playing the sport, and as a result of the activity, several schools have contacted Cumbria Wheelchair Sports Club to provide disability awareness sessions for their students.