For many people, living in Cumbria is not an idyll: it is challenging and difficult. However, there are organisations and projects that can help alleviate some of the problems people face. More than 53,000 volunteers across the county are actively involved in making our communities better for the future, from helping clear up after the floods to caring for the elderly. Volunteers help provide services that really make a difference to the lives of thousands of Cumbrians.

Consistently voted one of the most beautiful cricket grounds in the country, Patterdale Cricket Club has been at the centre of village life for nearly 100 years.

Founded in 1923, the club plays on land owned by the Patterdale King George V Playing Field Foundation. As well as the playing field, there are tennis courts and a small pavilion. The field is also used for outside groups for events that include the Helvellyn Triathlon, Ullswater Epic Swim, The Hodgson Brothers Relay, Ullswater Sheepdog Society, Patterdale Dog Day and other external event organisers.

The old pavilion was built in the 1930’s and was extended in the 1960’s to provide shower facilities but was no longer fit for purpose and structurally unsound. 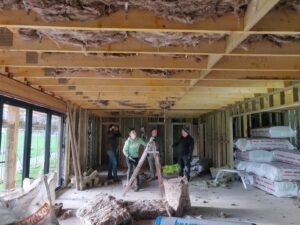 The club, which has a team in the Eden Valley League, raised almost £300,000 to fund the new pavilion through a range of fundraising events and grants. Grants of £2,000 from The Holehird Fund and £2,000 from the Ullswater Fund have supported the first phase of the project which is now complete and funding contributed to the internal work of the new community pavilion, including the kitchen and lockers for the changing rooms, were due to be installed over the summer of 2020.

Rob Shephard Chairman said : “Previously, the sports pavilion was used mainly by the local football and cricket clubs. External groups had to hire in portaloos and other facilities when using the field. This obviously restricted the appeal of the field and limited its use by both the local community and others from outside.

“The aim of the new community pavilion is to ensure that we get as many groups as possible active and involved in using the new facility.”