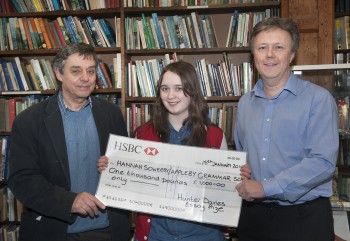 The £1,000 prize, administered by Cumbria Community Foundation is for a piece of personal reportage – nonfiction as opposed to fiction, a true story about something which has happened to them, big or small. The title of the first essay was “What I did in my Hols”

“Yes, a deliberately corny, childlike title,” says Hunter Davies, “but the idea was they could do with it what they liked, write about staying in bed all summer, digging their granddad’s allotment or going abroad. We were looking for good reporters, feature writers of the future, but also people with a literary turn, a sense of humour, able to handle conversation, narrative and most of all able to shape their own 1,500 words of personal experience so that you want to read on to the end.

Hannah will receive £500 personally to spend wildly as she wills, with the other £500 going to her school library.

Stephen Matthews is an author, publisher and owner of Bookcase in Carlisle. He was formerly head of English at Wigton Nelson Tomlinson School.

“Hannah engages the reader from the off,” says Stephen. “Her essay is peppered with humour, but never forced, just lively, natural and apparently off-the cuff, but actually quite polished.”

On hearing the news that she had won, Hannah’s first reaction was surprise. “If I’m honest, I’d forgotten all about the competition. When my teacher told me that I had won I couldn’t believe it. Of course I was overjoyed and it brightened up my day of endless coursework.

“I’m still unsure what to spend the money on, but I may spend a bit on some driving lessons. Then save the rest until I’m sure what to do with it.”

The prize is now going to be an annual event, open to any comprehensive sixth former in the county. The title for this year’s Essay will be announced at Easter – and all details will appear on the Foundation’s website.

“We got a good response for a first attempt,” says Hunter, “with some excellent entries from a range of schools all over the county, such as Ulverston High, Cockermouth School, Newman School, Carlisle, Nelson Tomlinson, Wigton, and Appleby Grammar. But we hope for even more next year.”

Andy Beeforth OBE and a group of leading Cumbrian’s slept above Stickle Tarn in the Langdale valley to raise awareness of Cumbria Community Foundation’s Winter Warmth Fund. The group had hoped to sleep on the aptly named Cold Pike but ice and snow on Wrynose pass made it dangerous to ascend from 3 Shires Stone.

Andy said: “The camaraderie provided by everyone made it a very special trip.” He added “We have up to two months of cold weather ahead of us so ask if people will please continue to donate to support the appeal?”

The ice on tents and bivvy bags proved that temperatures dropped below freezing. It was particularly cold for Nuclear Management Partner’s Gary McKeating who, along with Andy Beeforth chose to forego tents and slept under the stars in bivvy bags. Gary said “We’re very fortunate to be choosing to sample the cold and discomfort. Sadly for many people choosing between heating and eating is a daily decision”.

“The Winter Warmth Appeal has now raised £43,500 and we’ve already helped 120 older people with grants and expect that figure to rise to 300. We know from previous year’s appeals that this money saves lives – so our efforts are for a very good cause.”

Anyone can donate to Cumbria Community Foundation’s Winter Warmth Fund and the money raised will be given directly to those in need.

For ideas on how people can stay safe and warm this winter and how you can help people in your community, click here.

Last night I learnt some fantastic things about Youth Work in Parton near Whitehaven.  But more importantly so did Chris Woodhead, MD, SA Robotics Ltd.

Chris is the newest corporate member of CCF.  In conversation Chris mentioned that his company gives charitable donations to local causes, but it felt a bit random and he wanted to do something that was more focused and meaningful.

CCF had recently received a grant application from North Copeland Youth Partnership and I knew they were looking to increase their work with young people by establishing a new youth club in Moresby – right on SA Robotics’ doorstep!

Hence yesterday’s meeting.  Matthew (CEO in the making) and Adam (up and coming technical designer) told Chris and I about how members of the youth club had:

· Stopped antisocial behaviour and graffiti in their village

· Done loads of fun stuff as well as qualifying as First Aiders.

“I was impressed with the young people I talked with and I now really see the benefit of having such an establishment within any community, it certainly opened my eyes to the good work which goes on in our communities.”

Valda the Youth Development Worker is now looking forward to putting the plans in to action.

“I would like to thank CCF for putting us in contact with Chris at SA Robotics. This will enable us to extend the work that we are doing within the community and offer young people in Moresby more opportunities to take part in youth provision. The support is a fantastic opportunity to link with local businesses who can help us develop what we offer within the community and continue to make changes. Without this service that is offered by the Foundation we would not have known that local businesses would support our organisation.

Two more satisfied customers and a perfect story for this time of giving.

Best wishes to you All for Christmas and the New Year.

One of the things that CCF is proud of is its knowledge of the communities and people of Cumbria.  This is a bold statement to make but if you are an individual or business wanting to help people in Cumbria this is exactly the sort of information you need.  So how do we know?

Last week I took a call from RWE nPower Renewables who are in the process of setting up a fund to benefit a community close to some new wind turbines.

Already working with us in the south of the county their officer picked up the phone to find out about the community that could benefit from their new fund.

Like others we use Cumbria Observatory Statistics and Parish Profiles to find out numbers of people, their age, income, health, etc.  However, at the Foundation we are able to enhance this with information drawn from the grants that we have made.  We know that in this particular area the village halls are very active: Age UK advice sessions, Strickly dancing, pilates, painting, local history, mums and toddlers.  But the nearest thing to a youth club on offer is the local junior football team, unless someone is going to drive the 7 miles to the nearest town.

In addition the Foundation has recently held a workshop with community workers in West Cumbria where we asked them the question “Which communities do you work in which have real needs but never get any special support from statutory agencies?”  This rural community was one of the first to be mentioned – it has a higher level of child poverty than some urban wards who have received special government funding to tackle such issues.

With this sort of information at our finger tips it did not take long for CCF to  provide an understanding of the local community and what type of projects would need supporting.