Ian Gregg OBE helped turn his family’s small Tyneside bakery into a national institution. At the age of 25, he took over the reins of Greggs the Bakers, what has grown to be the UK’s largest retail bakery. He was Managing Director for nearly 20 years, Chairman for 18 years and during that time established The Greggs Foundation, which focuses on relieving social deprivation.

When Ian and his wife, Jane, moved to Cumbria, they set up the Greggs Fund with the community foundation to support Cumbrian projects. The income from the long-term fund contributes to the Cumbria Fund, where donations of all sizes are pooled together to grow this unrestricted fund and respond to the growing needs of local communities by providing much-needed funding to charitable organisations. 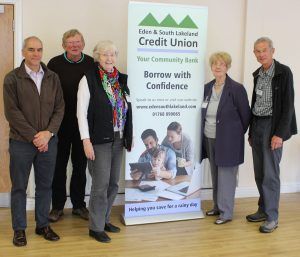 Ian said: “We are fortunate to live in Cumbria. But within this beautiful landscape many communities suffer deprivation in one form or another. CCF has the knowledge and experience to make best use of available funds to address some of these issues. We feel our donations are well managed and focused with as much input from us as we chose.”

As Ian states, there are areas in Cumbria where people live in poverty. 1 in 8 households have an income of less than £10,000 a year. People who struggle financially often turn to high interest lenders for help, ending up in more debt. Eden and South Lakeland Credit Union are tackling this issue by providing fair loans and a simple way of saving and received a grant from the Cumbria Fund to establish an outreach office in Kendal town centre.

The outreach office, open three days a week, is a forerunner for a permanent town centre office in Kendal. Since receiving the funding, the credit union has recruited over 50 volunteers. Doug Elsby, Trustee, said: “People are often surprised by the competitive rates on offer and choose one of our loans, knowing the interest paid goes to help those who find credit harder to come by.”

Ian also has a fund with the Community Foundation in Tyne and Wear and advises philanthropists: “Look to work with like-minded people to increase the impact you can have and not to be afraid to step back and let good, competent organisations determine the best use for your giving.”

It’s going to be a cold and wet start to the year for the team at one of Cumbria’s leading charities.

To kick-start a year-long fundraising campaign to celebrate Cumbria Community Foundation’s 20th anniversary in 2019, staff and trustees will be splashing out and venturing into the icy cold waters of Windermere on 8th January. 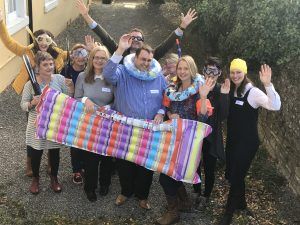 It’s all part of a year of special events called ‘Giving Back, Looking Forward’ which will celebrate the charity’s achievements to date and encourage the community to get involved in their own fundraising challenges.

All money raised will go into the Cumbria Fund, which supports around 50 community projects each year and helps improve the lives of disadvantaged people across the county. One charity to benefit is West Cumbria Domestic Violence Support. Known as the Freedom Project, it received £10,000 to support its running costs to provide free, long-term support to adults, children and perpetrators of domestic violence.

Richard Roberts, Director and co-owner of Gedye & Sons Solicitors and a trustee at the Foundation will be joining in on the day, along with another trustee John Wilson, former Managing Partner and founder of Baines Wilson LLP. Richard said: “It’s my birthday that day so what better way of celebrating than with a dip in Windermere to launch the Foundation’s 20th birthday?”

Annalee Holliday, Grants & Donor Services Officer at the Foundation, said: “We wanted to do something to challenge ourselves. It’s going to be freezing but we’re not one to shy away from a challenge, and the CCF team hope to raise £1,000 for the Cumbria Fund. We hope people will be inspired to either support our cause or create their own challenge.”

Can you dip into your pockets and sponsor the CCF team? Donations can be made here: https://mydonate.bt.com/fundraisers/windermeredip