TWELVE months after being hit by devastating floods, many residents are still struggling to rebuild their lives, says the charity head responsible for managing the Cumbria Flood Recovery Appeal.

Andy Beeforth of Cumbria Community Foundation, said: “Grants can replace essentials, but returning home is just the start of recovery for many residents.

“The stress and anxiety people are still suffering is considerable. We have seen families living apart, people losing their jobs – and even made homeless. The floods have sadly put people under considerable strain.  We know our current and future grant making, fueled by people’s generosity, contributes to helping people recover and rebuild both practically and emotionally.

“The need for support continues. We know that 700 families are still not back home and that this does not reflect the full situation, as some people remained living in their flooded homes, some are underinsured and those that have returned home report still having to deal with many issues.

“The generosity of people and organisations has made an enormous difference to how much we can help residents rebuild lives that were devastated last December,” he said.

More than 2,700 households and 130 community projects have received financial support. Andy continues: “As well as giving grants for essential household items, our whole ethos is to be helpful, supportive and understanding of people’s circumstances.”

“The Cumbria Flood Recovery Appeal has been a success because of the generosity of people who gave money. We are fortunate to live in such supportive communities. I can only say a heartfelt thank you to everyone who has supported the Appeal, including government, it is only through their support that we have been able to help so many floods affected people.”

Storm Desmond caused significant damage and disruption to more than 6,000 households and businesses across tight knit rural communities and our larger towns and cities. As winter approaches the health and emotional impact of the flood is becoming more apparent and the appeal is investing in projects to support people’s emotional wellbeing.

Over the next few months the appeal will continue to make household hardship awards and support groups affected by the floods. It has increasingly invested in resistance and resilience measures for both households and communities, to help minimise the extent of damage in the future, increase the sense of wellbeing and confidence in the present and help people be better prepared. With so much ongoing need the Foundation is confident it will spend all the remaining funds.

“Looking ahead we know that lessons have been learnt and that communities are working hard to be better prepared for future flooding,” said Andy.

Cumbria Community Foundation’s flood recovery appeal has raised £10.3 million for individuals, families and communities affected by the December 2015 floods, of which £7m has been awarded in grants.

Two community groups in Workington have been given a cash boost from family-run Cumbrian chartered accountancy firm, Lamont Pridmore.

Workington Wolves Football Club received £1,500 to set up a new under 11 football team and £1,000 was awarded to Healthy Hopes Cumbria to improve people’s emotional wellbeing and resilience.

Managed by Cumbria Community Foundation, the Lamont Pridmore Fund provides grants to organisations that improve the lives of people living in disadvantaged areas across Workington.

Workington Wolves FC was recently set up by a group of parents from Mossbay. The children had been part of Senhouse Street Stars FC but the club was no longer able to run an under 11 team and there was no other club for the children to join.

Workington Wolves FC trains twice a week, currently on the field by Moorclose but will be moving to St Patrick’s field, next door to Workington’s new leisure centre. The club will use the money to purchase training equipment such as football nets and ball bags, as well as covering the ground rent for the team to train on.

The social enterprise will use the funding to continue renting office space in Moorclose Community Centre. This gives them a base to undertake admin duties, plan future sessions and recruit and train volunteers.

Annalee Holliday, Grants and Donor Services at Cumbria Community Foundation, said: “The grants provide an opportunity for organisations to receive a helping hand as they address a need in their community. The Fund demonstrates how people can make a real difference to an issue they care about by creating a fund with the Foundation.”

A community festival celebrating diversity in Carlisle was given a £2,000 cash boost from the Abbeyfield Society Community First Fund.

Carlisle Unity Festival, organised by AWAZ Cumbria and their partners, One World, was aimed at building unity among the many diverse groups in the city while tackling prejudice and promoting understanding.
Charities that work with ethnic communities and minority groups showcased their services and the range of activities on offer within the community. Stallholders included Carlisle Refugee Action Group, Carlisle Mencap, the Terrence Higgins Trust, Palestine Solidarity Campaign and Carlisle Lions Club. 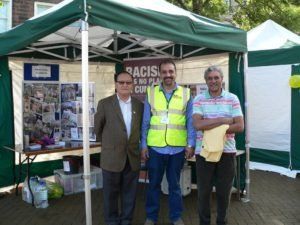 Local people were able to share and learn new skills and had the opportunity to experience a wide variety of food and  music, and enjoy performing arts from around the world, in Carlisle City Centre.

Cumbria is one of the least diverse counties in the UK, but this is beginning to change. Carlisle is becoming increasingly multi-cultural and diverse, yet there is a lack of opportunities for communities to come together and celebrate their cultures.

Minority and marginalised groups living in the city face issues such as racism and islamophobia which has been documented in recent hate crime reporting by Cumbria Constabulary. Aftab Khan, Development Officer at AWAZ Cumbria, hopes the event has increased awareness and understanding of the barriers and issues these groups face.

He said: “There is a need more than ever to demonstrate that people and communities are united in their spirit and action against any kind of intolerance, hate and xenophobia in Carlisle.”

“Carlisle’s first Unity Festival brought together a range of community groups and organisations to stand up to prejudice and show their community spirit in a time of great uncertainty.”

“The festival helped build community networks and people were able to learn more about the issues affecting minority or marginalised groups and how to tackle hate crime. The positive messages delivered on the day will have boosted those who are concerned about racism and xenophobia in the city.”