The money was given to older people in Cumbria who struggle to keep warm in the winter.

More than seven hundred grants were distributed which means more than 1,000 people benefitted from the warm generosity of others.

A quarter of this year’s total came in through one ‘fun’ fundraising idea, ‘The Big Sleep’ saw 167 people sleeping in a field behind the Low Wood Hotel in Windermere attracting £23,000 in one night in February.

Andy Beeforth, Chief Executive of Cumbria Community Foundation, said: “Our trustees set a challenging target for us to raise £100,000 to keep older people warm and safe in the winter. I am blown away by the warm generosity of the people in this county in their support of this appeal and I am very proud that we exceeded the Trustees expectations.  I am grateful to the Low Wood Hotel and the Berry family for their support and to the Age UK offices around the county and the Citizen’s Advice Bureau in Barrow who have helped direct the funds to older people in need.” 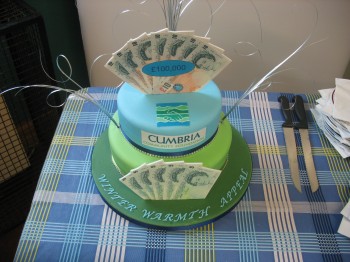 Cumbria Community Foundation will celebrate the success of the Winter Warmth Appeal by sharing a cake with a group of older people at an exercise class organised by Age UK South Lakeland.

Sonia Mangan, Director of Age UK South Lakeland, said: “Every day Age UKs across the county work with older people with a range of complex problems and situations. We know that more and more people are struggling financially and these grants have enabled us to work with people on a very practical solution – offering a small grant towards the cost of heating when it is most needed. Successful appeals like this one really do change lives and we would like to add our thanks to all those people who worked hard to make it happen.”

Cllr Ben Berry, whose family kindly hosted The Big Sleep in February, said: “The Winter Warmth Fund is all about helping our neighbours when they need us most. With The Big Sleep we’ve made it easy for anyone, young, old, fit or able to raise money for this vital local charitable cause and I’m very proud to be involved with that.”

Here is a link to a video which features a couple of people who have benefitted from a Winter Warmth Grant this year and tells the story through a short film:

Penrith and the Border MP Rory Stewart has helped raise awareness of the appeal by sleeping out in the Pennines in one of the highest and coldest places in Cumbria in January, he said:

“Cumbria has some of the highest instances of fuel poverty in the country. Our traditionally built homes are difficult to heat and frequently off the mains gas grid, which make heating them very expensive. When your income is fixed, as is the case for many retired, elderly people, rises in energy bills can quickly become unaffordable, and the only choice left in the worst cases is to endure a cold home. It is completely unacceptable that an average of 300 people in Cumbria alone will die from the cold this Winter. The Cumbria Community Foundation plays a hugely important role in helping vulnerable older people meet the costs of heating their home. I was only too happy to do anything I could to help raise awareness of the Winter Warmth Appeal and the foundation’s fantastic fundraising efforts.”

Click here to view the ITV Border news piece where Pam Royle spoke to Chief Executive Andy Beeforth and asked him why he thinks the campaign has been so successful.

Hello again dear readers. Nice to know you have remained loyal during my golfing sojourn to Turkey. I can assure you that cycling was never far from my thoughts as I strode down the lush green fairways and partook liberally of the free beverages. Suffice to say that a few kilometres were ridden in the surroundings of the luxurious spa and leisure complex.

By now my celebrity status amongst the Cumbrian Cognoscenti must be reaching stratospheric proportions following the much publicised photo shoot with my fellow literary giants, The Rivers Ride Bloggers. No doubt the publication of the story in the bastion of journalistic integrity – The Keswick Reminder, will have cemented our celebrity status. Funny how the Nationals haven’t been in contact yet though!!

Well then fellow riders, are we all getting excited with just over a week to go? I was so excited I had to go and spend a ridiculous amount of money on a new bike. Still, it is on interest free credit, but when the Darling Wife discovers how much I’ve spent no doubt she will demand parity and spend the same on shoes and handbags!!

And so the day fast approaches with final preparations and last minute training schedules being completed. Reports from various Psyclos are giving me the confidence that not only will we stand out as finely honed athletes, but will also be the best looking team, resplendent in our new team jerseys! 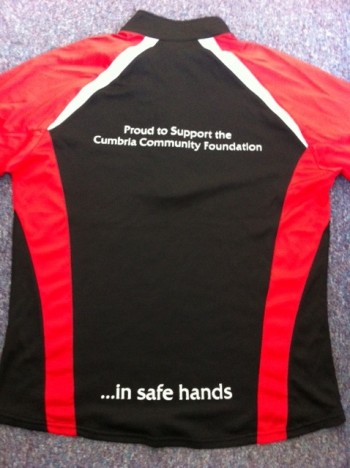 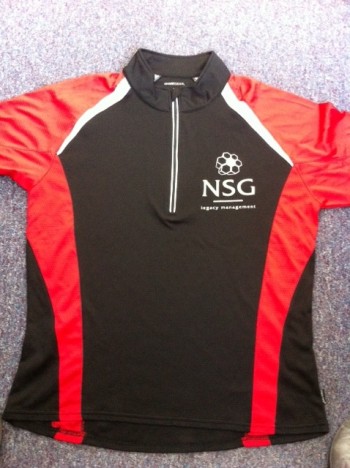 It was also good to see the baby Psyclo putting in some belated training as he sped past my house and up into the hills of Anglezarke and Rivington. Whilst he was doing that I was up and around the back roads of Brindle and Wheelton, passing along the way, the burnt out shell of a much loved local drinking den, The Dressers Arms. Lets hope she rises from the ashes and we can once again enjoy a few gills of Big Franks best bitter.

Other more worrying news from the Psyclos is that newbie Psyclo James Rudd is struggling to maintain his position in the saddle having fallen off twice during an easy ride over the North York moors. The members of the other lesser known NSG team, the NSGeese, are experiencing similar problems. Perhaps they are oiling the wrong parts of their bikes!!

And so my friends, I will leave you to your preparations, to oil those gears, to grease those cogs and to liberally apply the ointments.

I hope you will all take time out to come and see us at the NSG tent in Fitz park, you might even get to meet a local celebrity!!!

So lets hope the good old British summer can come up trumps and give us the wind at our backs and the sunshine all weekend.

As a wise old friend once said to me “I don’t know if it’s illegal to be handsome and ride a bike at the same time but whatever, I live dangerously”

So be handsome and live dangerously my chums!

More than 300 guests attended a Grand Charity Dinner held on 22 March at the Shap Wells Hotel.  The event was co-hosted by Cumbria’s outgoing High Sheriff, Diana Matthews, and current High Sheriff, Martyn Hart.  £20,000 was raised, which will benefit the High Sheriff’s Crimebeat Fund, administered by Cumbria Community Foundation. The funds primary purpose is to support young people in danger of becoming involved in the youth justice system.

Guests were entertained by historian and television personality, David Starkey, and there was a lively auction of specialty items and experiences donated by generous local businesses and individuals.  In addition to a sumptuous meal, the dining room itself was a feast for the eyes of  “a cornucopia of interesting people” (as one guest put it) from all over the County (and beyond); beautiful table arrangements with stunning tulips from Holland which could later be purchased for a donation to the Crimebeat Fund.

Martyn Hart says: “It was a fun and tremendously well-supported evening and a wonderful way to begin my year as High Sheriff; we’ve certainly hit the ground running!”

The High Sheriff’s endorsement can help support local charities, particularly those working with the most vulnerable, by raising the profile of their valuable work within the County.

“It is my intention to encourage people, particularly the young, to maximize their potential and self- esteem by helping others, and the substantial funds raised at this event will help support these exceptional local initiatives.”

James Carr, Chairman of Cumbria Community Foundation and himself a former High Sheriff said: “The Fund has given out almost £40,000 to groups across Cumbria. The money encourages young people to be involved in challenging activities, which can be shown to serve a purpose in diverting and deterring them from anti-social behaviour and crime. It offers young people a great chance to show how constructive they can be in their communities and what they can do to help themselves and others in their neighbourhood.”