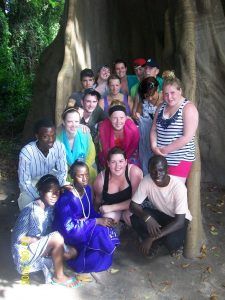 Mr Dunglinson set up the Mary Grave Trust in 1971. It is named in memory of his mother who came from Maryport. The Trust was set up with an initial donation of £20,000 and received further funds on Mr Dunglinson’s death in 1976.  The Trust is now valued at over £1.4m and grants totalling around £50,000 are made each year to young people primarily from West Cumbria.

The Trust is the result of the achievement and generosity of one local man. Born and educated in Workington, Burton Dunglinson was responsible for the relocation of the former ElectroFlo and Solway Flowmeters from London to West Cumbria. Having worked in America in the 1920’s, he was aware of the value of travel for young people.

The Trust began working with the Foundation in 2005 and since that date, over £714,000 has been awarded to more than 900 young people. Most grants fund school trips such as language trips to France and Spain or art and religious studies trips to New York.

One teacher, whose pupils received support said: “The fund gives the school confidence that less well-off families are supported to take part in great activities we offer. Coming from a family where my parents were long term unemployed meaning I never went on any school trips as a child, it means a great deal to me to see your organisation doing this kind of work”.

17 year old Marc who went to the Gambia as part of a youth exchange programme said: “The week I spent in the Gambia was amazing. It made me realise what I take for granted and made me a better person. I will always remember this trip when I’m struggling with anything in the future and when I do I’ll remember never to quit because anything is possible!”