Martyn Hart became High Sheriff of Cumbria at the end of March 2014. His term is for one year.

Born in Carlisle, he is  Senior Partner of Telford Hart Associates, a Carlisle-based Chartered Quantity Surveying and Cost Consultancy firm (established by his late father, Jack Telford Hart, in 1946). 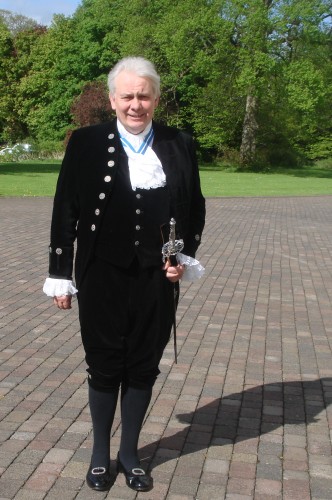 Martyn, along with his wife, Tess Hart MBE, have been members of numerous voluntary organisations and charities in the field of health, education and children’s issues particularly special needs.  A father and grandfather of 3, he has a personal connection through their late daughter, Lauren, who had profound special needs.

For over 20 years, Martyn Hart has been a governor of both his former school, St. Bees and James Rennie Special School in Carlisle where Lauren was a pupil.

Martyn believes much good can result in the year-long efforts and endorsements of a modern High Sheriff, particularly in the field of crime reduction and the development of crime prevention measures, especially involving young people.  The High Sheriff supports these aims through raising  awareness of the Crimebeat Fund and actively promoting charitable events.  A High Sheriff also works to promote a safer community by supporting local charities, with special focus on those working with the most vulnerable, and by helping to raise the profile of their valuable work.

Martyn regards the position of High Sheriff as an honour.  He recognises the exceptional work going on in the County and hopes to encourage people, particularly the young, to maximise their potential by helping others.  1,000 years on, Martyn believes High Sheriffs still have a significant job to do and feels it is essential that their current role remains relevant, whilst providing an important link with the rich and colourful history of our country.