Every year many people decide to give something back to their local community. This could be through personal giving as an individual or as a family, or by giving as a business. Often there is an assumption that giving is easy; that your gift will be effective and will change people’s lives for the better. However, if not done properly, giving can be very time consuming, inefficient and ultimately ineffective.

Long-term supporter of the Foundation, Penny, received an inheritance from a family member and wanted to make a difference to the communities in Cumbria by leaving a legacy. She said: “As my late cousin, Lawrence, left me a bequest in his will, I felt that a fund in his name but in the area in which I live, should be set up with Cumbria Community Foundation. This would be a good way of remembering his generosity. He supported various individuals and charities in and around the Home Counties for more than forty years, the majority assisting research in various medical fields and with musical organisations and musicians.

“As an amateur musician and semi-retired professional gardener, I decided that the fund should be used to support both individuals and groups in the fields of both music and horticulture in Cumbria. The Foundation has provided the ideal way for me to do this by running the fund ‘in house’ but keeping me well informed with the decisions made regarding disbursements from the fund.” 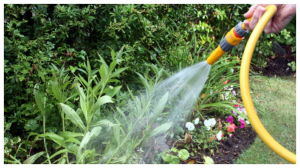 For ten years, Catherine, 59 from Wigton was unable to work as she was caring for her elderly parents. She received a grant from the Lawrence Fund to contribute to the cost of undertaking a BTEC Level 3 diploma in Horticulture at Newton Rigg College.

Catherine said: “I wanted to maximise my chances of getting a job, ideally in horticulture. The grant met the costs of materials, essential tools and equipment. Being in a new environment working with new people gave me a fresh perspective and a hope for new beginnings.

“I have since had paid employment and become involved in a sensory garden with Chrysalis in Wigton, a charity for people with learning difficulties.”