A rising cycling star from Penrith received £2,000 from the Cumbria Young People’s Fund to help towards competing in national and international events over the summer 2016 season. 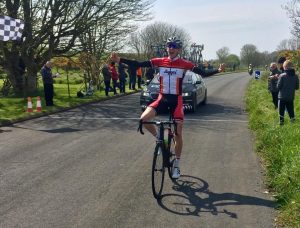 Mark has already had some major wins for 2017, as well as studying for his A Levels. He recently rode to stage three victory at the Sleepwell Hotels Isle of Man Junior Tour, beating Great Britain’s number one junior rider, Tom Pidcock. He also won the first contest of the Spanish national junior race series in February.

This summer, Mark has stage races in Holland, Belgium, France, Spain and Italy. Once he completes his A Levels, Mark hopes to pursue his aim of becoming a professional cyclist. He would like to join a cycle race team abroad for a year.

Mark said: “I am very grateful to Cumbria Community Foundation. The money I received last year has helped me move my cycling up a gear! It enabled me to travel out and compete in the Basque Country.  I achieved some great results last year which then helped me in to my present Junior race team Zappis.”