“When I’m at home, I just dream of being in the outdoors, making a fire and drinking hot chocolate.”

Ralf has been attending Watchtree Nature Reserve’s woodland summer school with his cousin for the last couple of years.

The former World War II airfield was chosen as a site to dispose of hundreds of thousands of animal carcasses during the foot and mouth crisis. Afterwards, to change the perception of the area, the local community decided to convert it to a nature reserve, which now attracts tens of thousands of people each year. 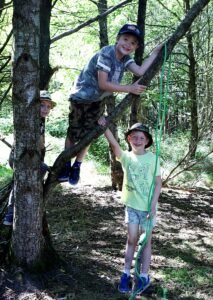 Learning and wellbeing is at the heart of Watchtree Nature Reserve. The dedicated education zone – segregated from public access – offers a secluded woodland, a fire circle, den building and foraging zones, and woodland crafts, and lets children learn and make new friends in a natural outdoor setting.

The charity prides itself on being accessible to all and offers a network of trails making it easy to explore and to experience wildlife.

A grant of £3,387 from the Foundation was used to extend the trail network further into the woodland, and equipment was purchased to help volunteers to maintain the network. 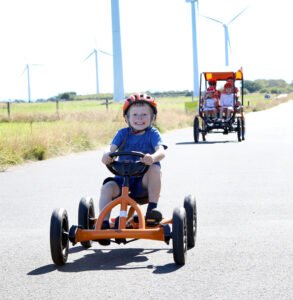 The charity also has a fleet of bikes called Watchtree Wheelers. With over 100 bikes suitable for all abilities meaning everyone can adventure out and explore the surrounding countryside.

Kevin, from Carlisle, suffered a near fatal haemorrhagic stroke which left him unable to use the left side of his body. Watchtree has played an important part in his recovery, and he travels round the reserve on a trike.

Ryan Dobson, Reserve Manager said: “Watchtree is a wonderful, unique place for all ages and abilities to enjoy. It is made up of four different habitats, wetland, scrub, woodland and hay meadows and we have lots of native Cumbrian species, which now call this home. We try to adapt and maintain their habitats to keep them happy and keep them breeding in this area.”