Friendships have been forming over unlikely topics including pollution and invasive non-native species, which are just some of the issues affecting West Cumbria’s rivers. 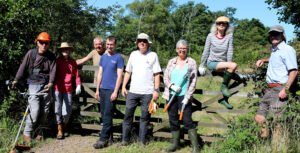 Himalayan balsam is a non-native invasive annual plant which grows vigorously over the summer months, destroying native plants and reducing biodiversity on riverbanks. As it dies back in winter, it leaves bare banks, making them vulnerable to erosion.

Volunteers from different parts of the region have been coming together to help slow its spread near the river Irt, between Santon Bridge and Gosforth.
A grant of £3,274 was used to purchase new tools and equipment as the charity’s tools were worn to the point where the group had to limit the numbers of volunteers who were able to attend.

Petra Tjitske Kalshoven, a Lecturer in Social Anthropology at the University of Manchester, has recently learned how to pull non-native Himalayan balsam. A friend introduced her to volunteering because she wanted to meet new people and learn more about Cumbria and its ecology. “Anything to help biodiversity helps the planet,” she said.

The Trust wants volunteers and community groups to get involved and learn how to pull balsam, then adopt their own stretch on a local river to help control it over a wider area. It benefits both wildlife and landowners by helping to manage livestock, stabilise riverbanks, reduce erosion and provide good habitat for spawning fish.

Lesley, another volunteer, said: “Volunteering has given me the opportunity to meet with like-minded people, work in the outdoors and maintain the natural environment. It has also opened doors to other opportunities. The new gloves have been well used!”

The tools and training have been so important in facilitating the running of volunteer events within Wasdale.

Chris West, Project Officer said: “Several of our regular volunteers live alone and have expressed how valuable to their mental and physical health the volunteer events are. These provide them with the opportunity to get out of the house to socialise, undertake physical activities while benefiting the environment.”