South Cumbrian youngsters, who have struggled at school, are mucking in on the farm and developing essential skills to commit to more study, work or volunteering. 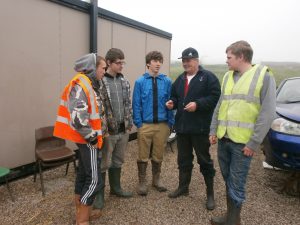 Cowran Training Limited, an educational centre and working farm at Pennington near Ulverston, received £5,000 from the Dulverton Trust towards its “Stepping Up” project supporting 16-19 year olds who are not yet ready to go into further education or employment.

More than 20 youngsters were given the opportunity to develop their social, communication and motivational skills and boost their chances of employment by gaining level 1 and 2 land-based qualifications.

Many came from very poor backgrounds, living in the most disadvantaged wards of Barrow-in-Furness, or in isolated, rural communities, and achieved few or poor academic grades. Around 85% of them had other issues stopping their progress: lack of transport, problems with accommodation, no experience of work and work practice. Some had been involved in small scale crime and antisocial behaviour.

The six-month project offers students real hands-on experience of the day to day activities of a working farm. They were involved in the care of farm and small animals, including feeding, watering, mucking out, conducting health checks and exercise sessions.

One young girl was an aspiring jockey, having won a scholarship to attend the British Racing School in Newmarket, but due to injury was unable to continue and had to return to Cumbria, where she unfortunately became homeless.

Working with the horses on the farm inspired her to pick up her British Horse Society qualifications and get a part-time job at a local riding centre. She completed a Level 2 Diploma in Animal Care at Cowran, and went on to get a full time job at the riding centre.

Michael Diss, Director, said: “It is enormously satisfying for them to look after the animals in a clean, healthy and well-fed environment. They quickly developed a sense of ownership, pride, and achievement.

“They come to us lacking in confidence, without self-worth and some having a strong sense of failure as they’d dropped out of training, lost jobs or become socially isolated. As a result of the project, they have gained confidence, motivation, skills and qualifications and have detailed work experience to demonstrate their ability on their CVs.”