Earlier this year, SoundWave was recognised by the High Sheriff of Cumbria for helping young people positively engage in their community through music workshops and events, and the charity received £1,000 to put towards youth activities.

The money was used to run a music residential weekend at Blaithwaite House in Wigton as part of their Do It Yourself Music Festival, a 12 week programme of support, workshops, residentials, gigs and master classes. 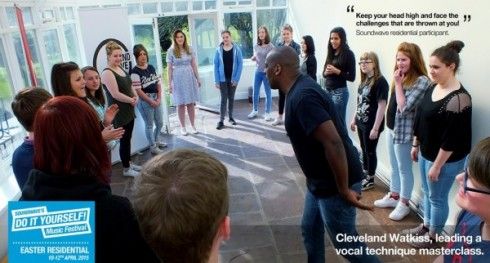 During the 3 day residential young people worked with a team of experts including Happy Mondays’ singer Julie E Gordon. There were  also informal performance opportunities’ including Open Mic evenings and the young participants could road-test work they had created collaboratively during the weekend.

Soundwave, based in Workington, exist to work with youth professionals, musicians, artists, partners and stakeholders who share a commitment to provide access to music for those who are often overlooked in society; especially children and young people, and low income communities.

David Roberts, Director of SoundWave, said: “The feedback from the young people who attended the residential was overwhelmingly positive. So much so that we were asked to provide more of the same, perhaps two or three times per year. The guest artists we invited to work with participants also had a great time and expressed their keenness to return to the area and work here again.”