Cumbria Community Foundation is calling for community groups in West Allerdale to apply for grants from the Robin Rigg West Cumbria Fund.

Funded by an annual donation from E.ON UK, the Robin Rigg off-shore wind farm developer, the community fund operates from Workington to Silloth and inland to Embleton.

Money from the pot supports groups undertaking activities that contribute to reducing the effects of climate change and benefit the local community.

Jimmy Lettice, official at SRUC said: “With the grant from the Robin Rigg Fund we were able to purchase a full set of solar panels at the club, this enabled us to reduce our ever increasing utility bills thus freeing up monies that we can pump back into the development of the club and its members. We can now also hire out the floodlight area at the club at a minimum price, making it more accessible to more local groups for more events in the area.” 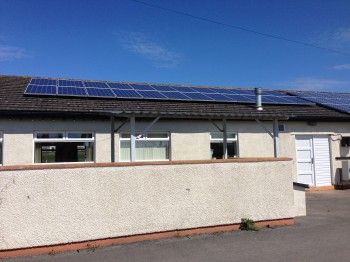 Overall, 32 solar panels were installed onto the roof of the club. Due to the Government’s Feed-In Tariff, the Government pays the club for the electricity they generate. This has meant that as well as not having to worry about electricity bills, the club is getting income from the panels.

Use of the flood lights at the club is now a more common occurrence; this has improved training dramatically as the players are able to stay out as long as they want. The club is often used by the community as well. The solar panels have allowed the club to charge a reduced fee to people that want to hire it for functions as they are saving money on their electricity.

As well as the financial benefits of the solar panels, the club has been able to educate the younger players on the importance of being green and reducing their carbon footprint.

Overall the club has estimated a financial benefit of £29,617 over 20 years.