In recognition of the Rugby World Cup being played in England this year, Upper Eden Rugby Club received funding from the Westmorland Limited Fund to invite year one and two children from local primary schools to join in a celebration event. 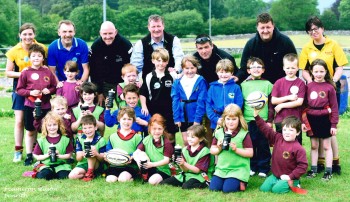 The program was led by coaches from the Upper Eden club, Cumbria RFU and other sports clubs with support from Kirkby Stephen Grammar School young sports leaders.

In a grand finale, all children, coaches, volunteers and school staff combined to perform a haka (traditional Maori war dance performed by the New Zealand team).

Event co-ordinator Barney Slack said: “It was a fantastic afternoon. My thanks go to all the primary schools for their support, to coaches and young leaders involved on the day and to Westmorland Ltd as their funding enabled each child to receive a water bottle and RFU goodie bag.”