Grace is the daughter of Lynsey and Errol Eland, and Lynsey said: “Grace manages school work, training and competing, which is unusual. At the nationals she attended, most of her opponents are no longer in mainstream school, but are training full-time at tennis academies.

“In the latest tournaments, Grace won the national Doubles title for the first time with her partner from Cheshire, this has helped cement Grace’s position currently as No.5 on the national summer leader board. This is a fantastic achievement for Grace, her club and team in doing this when competing with 90% of the top 30 in the country are not in mainstream education. Also winning the national title, makes Grace the first female junior to do so from Cumbria.

“Grace has claimed another U18 title in Edinburgh in June at the age of 13, where previous winners of this tournament have been Judy Murray, who claimed this 3 times. Grace feels she’s on track to beat that! 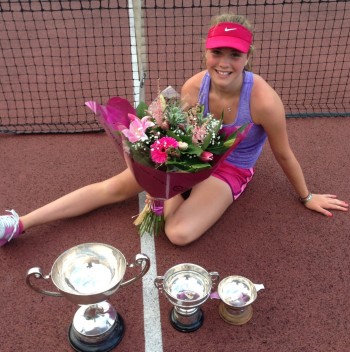 “But her most admirable accomplishment to date has come recently competing in Scotland, in the UK’s biggest entry event outside of Wimbledon within the UK, this year alone with an additional 150 new competitors. She claimed the U14 doubles,  U16, U18 & Women’s open title’s at the event, which is a huge success based on a 13 year old girl who had to play 5 matches a day for 5 consecutive days, including 4 final’s on the last day (being on court for 10 hrs on the last day!). This really did demonstrate that all the hard work that goes on away from competitions really does count in preparing and conditioning Grace. Which without your support Grace could definitely not do – So a huge thank you.”

Grace began playing tennis at the Chatsworth club in Carlisle when she was six. She also plays weekly with Kirkby Stephen Grammar School community sports officer and tennis coach Gary Payton, and attends the high performance centre in Newcastle twice a week.