Many of us will never know the terror of what it’s like to be fleeing war or persecution and having to leave your home country to escape danger.

To raise awareness, a powerful interactive, multimedia exhibition has toured schools across Eden to highlight the experiences of what it’s like to be a refugee seeking asylum in Britain. 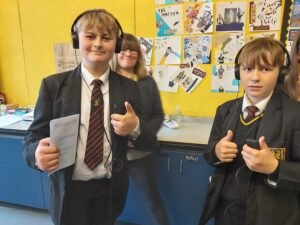 A collaboration between Penrith and Eden Refugee Network and Global Link, Escape to Safety is a series of rooms that are constructed in a school classroom with the aim of taking students and members of the public on a journey to simulate aspects of the modern refugee experience. It starts in their homelands and ends in accommodation in the UK. Wearing a headset and holding travel documents, those who pass through the exhibition will hear, feel, see and come to understand a little more about what these journeys can entail. It even includes a citizenship test.

The two-week exhibition included the story of one young person who had to flee Iran due to religious persecution, and her terrifying and difficult journey to reach the safety of Britain.

Sarah Wilson, Chair of Penrith and Eden Refugee Network, said: “Listening to her story clearly moved the students and undoubtedly had an additional positive effect on their attitudes to refugees.”

“It featured a film of a Syrian family who had to flee the bombing in Syria and make their way to the UK in order to seek asylum and make a new life.”

Visitors to the exhibition listened to stories read by refugees of their experiences, while moving through a series of ‘stations’ designed to reflect the different stages of a refugee’s journey. They also experienced a mocked-up but very realistic refugee shelter, to reflect on the challenges that families face when they must live in one. 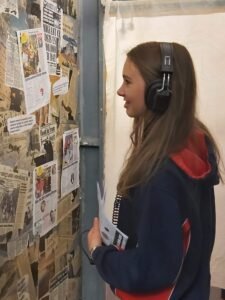 Sarah continued: “One sixth form pupil who came through the exhibition was so moved by what she learned that she went straight to her head teacher the next day requesting that the school set up a group specifically aimed at supporting refugees and asylum seekers in the local area.”

Over 1,500 people visited the exhibition, which was supported by a £4,525 grant from the Cumberland & Westmorland Herald Fund, Evening Hill Fund and Holehird Trust Fund. It was designed and created by Global Link in Lancaster and was closely linked to the Secondary PSHE curriculum and was open to school pupils and the wider community.

Penrith and Eden Refugee Network (PERN), recruited, informed, trained and managed a team of volunteers who were instrumental in supporting the event. PERN is a network of local people based on the principles of good neighbourliness, promoting a civil society and a desire to express common humanity. The group aims to raise awareness on global and UK refugee and asylum seeker matters.