Cumbria Rural Choirs were awarded £1,500 from the Abbeyfield Society Community First Fund towards their annual concert.

Cumbria Rural Choirs are one of the largest amateur choirs in the country and comprise Wigton Choral Society, Keswick Choral Society and Ullswater Choir, Penrith. Their annual concert brings rural choirs and independent singers from across Cumbria together.

This year’s concert was held on the 5th of March at St Andrew’s Church in Penrith. The singers and instrumentalists performed Jongen’s Mass and Saint Saens Requiem. Funding was used to pay the performance and rehearsal fees, as well as travel costs to and from the concert. 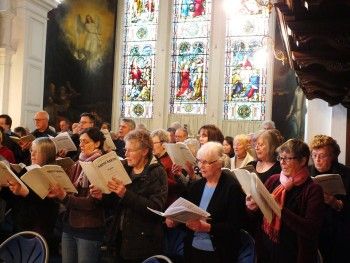 The remote villages and small towns of Cumbria have limited access to professional musicians, orchestras and choirs. Cumbria Rural Choirs give these communities the opportunity to participate in musical activities that are otherwise unavailable to them.

Loneliness and social isolation are prevalent features in the lives of many older adults living in Cumbria’s rural communities. Involvement with an organisation such as Cumbria Rural Choirs helps combat these issues, as individuals are able to mix socially with people who have similar interests.

Margaret Riches, Fundraiser for the group, said: “All the performers developed their musical skills and enjoyed sharing music with people who have similar interests.”

“People living in rurally isolated areas have been given the opportunity to take part in a challenging musical event, enabling them to extend their social networks and cultural horizons.”