A Cumbrian cancer charity received a grant of £250 from the Cumberland Building Society Charitable Foundation to provide cookery classes to people who have been affected by the disease in our region.

The Odyssey Foundation, which was set up by local cancer survivor Sandra Jones, aims to enhance and improve the lives of people in Cumbria who are affected by cancer. The charity’s approach to healthy eating aims to encourage people to eat a whole food diet that includes fresh, unprocessed foods, based on the belief that people are healthiest when they follow a diet composed of foods in their most natural state.

The Odyssey Foundation worked alongside Eden Valley Hospice to deliver the ‘Take Care and Cook’ sessions to anyone who has been affected by cancer in Cumbria. The fun, practical workshops were delivered by celebrity chef John Crouch who demonstrated healthy recipes from the Macmillan Recipe Book.

The audience were able to cook along with John while sampling the delicious food throughout the sessions. People who attended the sessions were also given a free recipe book so they could continue to make the healthy recipes at home. 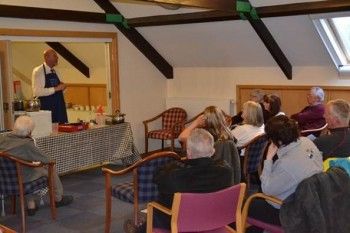 Sandra Jones, charity founder, said: “The workshops exceeded everyone’s expectations. People left the workshops with a ‘buzz’ and were asking if they could have more sessions.”

Sandra described the positive impact the workshops had on a particular cancer survivor. She said: “One lady had not been out of her house since she had finished her cancer treatment in June 2014. She saw an article about our healthy eating sessions and decided to come along. She really benefitted from our sessions and has found the social interaction of great value to her.”

The Odyssey Foundation hope to help more people affected by cancer with their cookery workshops in the future. Sandra said: “A lot of participants have already provided suggestions for future sessions. We want to roll out the cookery project as widely as possible and reach out to as many as people as possible who have been affected by cancer.”