Funding to run multi-generational creative art sessions has helped to reduce poverty and isolation in Barrow.

St Matthew’s Community Hall, on Highfield Road, is located in one of the most disadvantaged wards in the country. £4,851 was awarded from the Comic Relief Fund to run an art club for young people aged between seven and eleven years old and an art workshop for adults from the more vulnerable and isolated parts of the community. 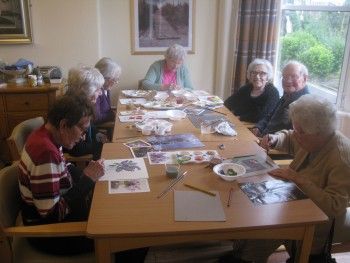 More than 350 people attended the free weekly workshops, led by professional artists with support from local volunteers. The art club was designed to provoke young people’s imaginations and encourage personal expression while the workshops for adults aimed to break the pattern of loneliness and increase self-confidence and motivation.

The project worked alongside local youth groups and organisations including Age UK, Barrow Disability Centre, Mind in Furness, Women’s Community Matters, and Cumbria Alcohol and Drug Advisory Service (CADAS) to ensure those most in need were included.

Wendy Kolbe, community organiser for St Matthew’s Community Hall, said: “Youngsters have greatly enjoyed the stimulation of working on a creative project. The older adults who are more vulnerable or have mental health issues have really looked forward to the sessions for both the creative and social elements. Throughout the age groups, individuals have shown an interest which will continue long after the project.”

One person who has multiple health problems and lives in sheltered housing has continued to paint now the workshops have finished. She said: “It’s fantastic, I can get my paints out and everything melts away: problems, aches and pains. I love it, it’s given me new motivation to get up in the morning.”

Wendy believes the workshops will have a lasting positive impact on the most vulnerable members of the community.

She said: “The project has undoubtedly improved their sense of wellbeing and helped to alleviate the isolation many have experienced, thereby improving their quality of life.”