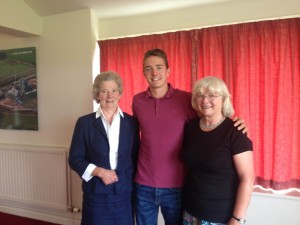 The 5000m runner, from Carlisle, was awarded £2,200 from the Cumberland Educational Foundation, a grant making fund managed by the charity.

The 23-year-old used the cash to pay for training camps in America and France to get him in top shape for the summer.

Tom said: “I would like to say a huge thank you for the grant Cumbria Community Foundation gave me. The money was a huge factor in helping me focus on my training for the championships this summer. I was able to travel to the USA in April / May for a two month training camp, then a six week stint in the mountains in the south of France which was used as a preparation camp for the Commonwealth Games. I was able to achieve my goals of winning my first British title over 5000m. I achieved selection for the Commonwealth Games and the European Championships where I finished 7th and 12th respectively.”

Tom is heading back to America, where he gained his degree in Entrepreneurship and Marketing from Oklahoma State University, to pursue his running career.

Claire Hensman, Lord Lieutenant of Cumbria and President of the Trustees of Cumbria Community Foundation, said: “I am so pleased that the Foundation is able to raise the aspirations of some talented young people and give them new opportunities to excel. It is so exciting that Tom has been able to take advantage of the grant to benefit particularly from high altitude training overseas helping him to realise his potential.”

Andy Beeforth, Chief Executive of Cumbria Community Foundation, said: “I am pleased we have been able to help Tom. His seventh place in the 5000m at the Commonwealth Games in Glasgow is testament to the hard work he puts in to his running. It’s great to see Cumbrian athletes performing so well on a world stage.”

Tom had some advice for aspiring young runners in the county, he said: “It’s all about the mini steps you make, winning a local fell race or a race at a local show. You’ve got to enjoy it, you don’t become a runner for the money! It takes a lot of time, dedication and effort but it is worth it. And you have to accept there will be frustrating times, like when I didn’t feel like running and my dad would say ‘if you don’t run, you wont get anywhere’ and he was right.”

Tom is hoping to be selected for the World Championships in Beijing in 2015 and he would love to be an Olympic Athlete in Rio in 2016.