Budding young musicians in West Cumbria were given the chance to develop musical events in their own communities thanks to £4,287 awarded to SoundWave by the #iwill Fund. 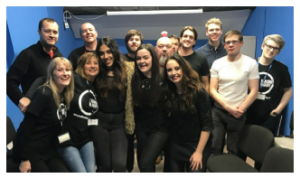 Based in Workington’s Theatre Royal, the ‘Cables’ project supported four young leaders to facilitate focus groups for other youngsters to determine what kind of musical events they would like to see happening in their community. The group then went on to organise and run the events.

Soundwave runs five projects across Workington, Whitehaven and Keswick and regularly works with more than 150 youngsters each week, and the young leaders have worked with all of them.

The group formed a new relationship with Workington Library, led by one of the young leaders, Simone. She contacted the library and enquired about using it as a venue for an event she wanted to organise. The library liked the idea and thought it would be a good way to attract more young people into the venue. Soundwave musicians played live in the library, which attracted a new audience. It was a great success and the event was repeated. 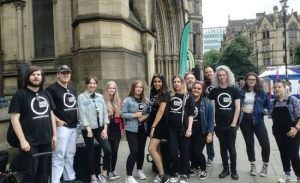 Dave Roberts, Director of Soundwave, said: “Simone made herself indispensable as a young leader which led to Soundwave employing her. She got a place at the Liverpool Institute for Performing Arts but wanted to keep her job, so we managed to find a placement for her with Merseyside Youth Association, which we support, and she has recently completed her Level 2 Youth work training.”

Xanthe, another young leader completed her Silver Arts award while working on the project. She consulted with her peers, set up drop-in sessions for the general public and became a great mentor. She is now employed by Soundwave to run the Hollr project, an online collective where young people aged 12-19 share what’s on their mind. The Hollr project came about through youth activism, which identified a lack of credible online platforms for local young people.

Dave continues: “The work and projects the young leaders have been involved in has given them an insight into how to plan and manage projects and to deliver them effectively. More importantly they have gained an understanding of how to recognise the impact they can make on other young people’s lives.”

Set up in 2007, SoundWave’s goal is to create fresh and meaningful opportunities for people, especially young people in challenging circumstances, to use music and singing to learn, live better, connect with each other and inspire change in their own communities.