One charity to benefit is Vulture Club in Whitehaven, which helps people to cope with recovery from issues such as drug or alcohol addiction, social isolation or other difficult obstacles in their lives. It aims to create a safe, relaxed and confidential community for members to meet, have fun and grow. 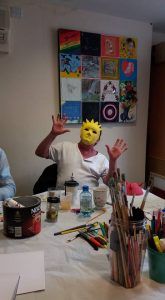 Phil McHugh, a former painter and sculptor for Lilliput Lane miniature models, sought help from the club following drinking problems. He said: “Before I joined Vulture Club I was in a particularly dark, desperate and vulnerable place. I had been drinking since the age of 14 but excessively over the last three years.

“I attended an initial assessment and it was then that I realised that I was dealing with an addiction and alcohol was the drug. I began to understand the slow process of my recovery and this re-ignited my passion for creative arts and I started drawing and sculpting again.”

Another person to benefit is 68 year old Ben*, who lives alone on the outskirts of Whitehaven. He was persuaded to ‘give Vulture Club a try’ by his daughter, who was concerned for his welfare.

Ben was very withdrawn when he first attended the Creative Writing sessions and would rarely speak. He had low self-worth, compounded by deafness which added to his sense of isolation. He was also preoccupied by worry about the health of his son, judging himself for not being able to help with his son’s addiction issues.

“I was out on a limb at the time and wandering aimlessly. I wasn’t very hopeful at the time, even afraid to enter at first but I plucked up courage. I still feel a little apprehensive, but I know I would have been off my trolley by now if I didn’t have somewhere meaningful to be,” Ben said.

Initially, Ben wasn’t comfortable writing or reading out his pieces but through his own courage and the continuing support from the group he now contributes to every Creative Writing session. As talented singer and harmonica player, he also sang at the celebration evening held to mark the success of the pilot Creative Writing Project, encouraged by his fellows in the Creative Writing group.

His demeanour changed from reticent to glowing with the applause he received. He now attends all the sessions and is gradually building his confidence and learning to recognise his value.

David Judd, Coordinator, said: “These activities not only cover aspects of health and wellbeing, but are also educational and vocational leading to growth in personal empowerment, self-esteem and confidence, allowing our members to make more positive life choices.

“The funding from Comic Relief allowed us to increase our level of service and support from three days a week to five while introducing a new Creative Writing Project. It has allowed us to employ two Vulture Club beneficiaries on a part time basis which further strengthens our credibility within the community while supporting our belief and ethos that long term recovery is achievable and sustainable.”

*Name has been changed