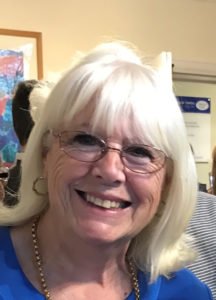 of South Tees NHS Hospitals Trust in Middlesbrough and Northallerton.

Since retiring to Cumbria she has continued her interest in neurological conditions, supporting people with brain injuries as Chair of Headway South Cumbria, and as the founder Chair of the Cumbria Neurological Alliance. She is a trustee of the Cumbria Victims Charitable Trust, which is one of the funds held within the Cumbria Community Foundation portfolio, and is honoured to join CCF as a trustee.

Glenys is a strong supporter of community initiatives and ran the Kendal Organ Donor project in 2015 for the then Mayor of Kendal, to make Kendal the first Organ Donor Town in the country. She is a member of the newly formed Give A Day Kendal group and has published two books on local and family history. Her hobbies include fell walking and live theatre.