The Dora Beeforth Fund was established in memory of the wife of the Foundation’s Chief Executive. Dora was born in Cumbria and attended the Lakes School in Windermere. She enjoyed the outdoors, was a volunteer warden with the Lake District National Park and a volunteer with Cumbria Youth Theatre. She was also a keen runner and orienteer. The Fund was created in her memory to enable children and young people to experience activities and opportunities which they otherwise would not be able to afford.

The Fund received a £10,000 boost in 2012 as a result of the tragic death of Michael ‘Mic’ Machell. Mic died at the age of 23 in a climbing accident in the USA. Members of his family and friends donated money to the Langdale and Ambleside Mountain Rescue Team to provide a lasting memorial to Mic. Mic was an active member of the team for three years, being involved in 170 rescues. The Mountain Rescue team decided they wanted the money to be used to support young people developing a career or gaining experience in the outdoors, something which is possible through the Dora Beeforth Memorial Fund. Dora and Mic shared a love of the hills and although they never met, they had the same personal motto ‘Carpe Diem’. 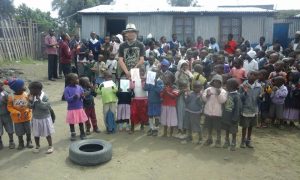 19 year old Ryan, who attends Kendal College, suffers with autism and has special educational needs. He received funding to go on a once in a lifetime trip to Kenya for two weeks with the college. As part of the visit, Ryan was involved in community building, where he worked alongside local people in Nakuru to help build and improve schools in the area. Ryan also took part in a 3 day safari at one of Africa’s greatest wildlife reserves, Masai Mara. Ryan’s mother said: “Ryan gained a valuable experience of exploring another culture which has enhanced his personal development, He would not have had this opportunity, had it not been for the grant.”