Our first corporate donor was the Cumbrian Newspaper Group, who donated £100,000 to set up the CN Group Fund. CN Group was one of the country’s last remaining family-owned independent newspaper groups and was sold to American-owned media giant Newsquest in 2018.

Robin Burgess, who was at the time Chief Executive of the Carlisle-based CN Group said: “We have always been very involved in the local communities we serve with our various titles. When in 2000 we had a one-off financial windfall, we immediately thought of setting up our own fund with Cumbria Community Foundation so that there could be a long term benefit to deserving Cumbrians from our good fortune. We have now over the years made some varied and substantial grants to organisations which we both enjoyed doing and have found to be useful public relations for our titles”. 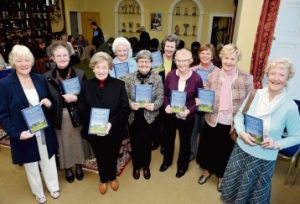 The CN Group Fund gave £500 to a group of retired nurses who form part of the Whitehaven Hospital Research Group. The money was used to write a book on the history of the former Dovenby Hall Hospital, which is now the site of the M-Sport world rally team.

The hospital opened in 1931 for people with mental health issues and learning disabilities, and at one time had 400 patients. Research had been compiled from interviews of former patients and staff and old articles from the Times and Star. The book titled ‘Dovenby Days’ also features photographs taken at the hospital by staff and patients.

Maureen Fisher, Group Leader said: “We think it is very important to record reminiscences and information about our communities before that knowledge is lost and forgotten. We hope the book encourages interest in local history and the history of care of those with learning disabilities.”