Holiday and second homeowners are helping communities thrive as two community projects receive the first grants from a new fund.

Cumbria Community Foundation’s Home from Home Fund invites second and holiday homeowners to donate the equivalent of one week’s rent each year, with a minimum suggested donation of £500.

The funds are then allocated to specific projects in towns and villages where many of the properties are located.

Carer Support South Lakes has developed a health and wellbeing programme, which will support around 140 unpaid adult carers in the district.

Debi Marsden, CEO of Carer Support South Lakes, said the demands on unpaid carers could lead to financial issues, as well as feelings of isolation, stress and other physical and mental health problems.

“The health and wellbeing programme works with adult unpaid carers to strengthen their resilience, develop healthy coping strategies and build their confidence and self worth,” said Debi.

“The focus will be to help carers identify their individual needs and offer support that will lessen the impact of their caring role.”

The programme involves group work and one-to-one counselling, as well as therapy sessions, such as yoga or reflexology.

“A health and wellbeing practitioner will work with the individual to find the right resource and help them get to do what they want to do at a time that they wish to do it,” said Debi.

“It could be anything the carer feels they need to lessen the impact and enable them to cope.”

“It really does make a massive difference,” said Debi.

“The funding enables us to employ a part-time worker to run the programme and have all of the infrastructure behind them – the laptops and phones and everything else – that will enable them to do it.”

Meanwhile, Lunesdale Hall, in Kirkby Lonsdale, received a donation from the Home from Home Fund to help pay for a new kitchen.

The building, which dates back to 1895, is used for a range of community, recreational and commercial purposes.

During the Covid-19 pandemic the hall began running a ‘community cupboard’ providing food to people in need and hosting regular community lunches.

However, Michael Burchnall, deputy chair and secretary of Lunesdale Hall committee, said the kitchen is not currently suitable for preparing food for large numbers of people. 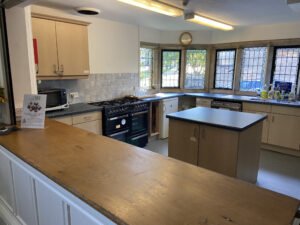 Michael says an upgrade of the kitchen will help solve this problem.

It will also provide facilities to cater for a growing number of enquiries from people who want to book the hall for weddings or other events.

It is hoped work could begin to revamp the kitchen in late September.

“Everything we’re getting in grants means that we don’t have to spend our diminishing resources on the hall and will help it to play an even more important role in the community,” says Michael.

Both organisations will benefit from a £1,000 donation towards the total cost of their projects, helping to make them a reality.

The Cumbria Home from Home Fund has been developed in partnership with self-catering agents and holiday homeowners operating in and around Lake District and wider Cumbria and is also being backed by Cumbria Tourism.

Jacqui Currie, Head of Development at Cumbria Community Foundation, said: “We have been very pleased with the response to our Home from Home Fund and I’d like to thank everybody who has donated and helped to promote it.

“The Fund provides an easy mechanism for holiday and second homeowners to give back to the communities that host their properties.

“It’s fantastic to see these funds doing exactly what they are intended to do; making a real difference and improving the lives of people in our local community.”