The scale of financial help provided by Cumbria Community Foundation during the pandemic and lockdown is highlighted in a report published this week.

The Foundation launched the Cumbria COVID-19 Response Fund on March 17, exactly two weeks after the county recorded its first case of coronavirus and six days before the UK went into a national lockdown.

In the six months to the end of September, £1,714,224 has been raised as the Foundation met the challenge of a global health crisis unseen since the Spanish flu epidemic after the First World War.

The interactive report, titled Cumbria COVID-19 Response Fund: The First Six Months, details the dozens of groups the Foundation has assisted, from stalwarts of the voluntary sector such as Meals on Wheels and mountain rescue teams to those set up specifically to deal with this unprecedented event.

Grants were often approved within a week of application and ranged from £100 for 5th Kendal Guides to £74,580 for Barrow Borough Community Resilience Forum.

It also gives a voice to the experiences of some of the organisations during lockdown including Ambleside Parish Centre, Cruse Cumbria and The Farmer Network.

And these changing times are documented pictorially by award-winning photographer Stuart Walker from the Thursday night Clap for Carers to the medical staff on shift in full PPE.

Andy Beeforth, CEO of Cumbria Community Foundation, remarks on how different the pandemic has been from the aftermath of Cumbria’s floods and that this crisis is far from over.

He writes: “Normally in a report like this, I would be able to say that the flood waters have gone away, the shops have reopened, most people are back in their homes, and hopefully it’s not going to happen again for a long time.

“But the impact of this pandemic, the needs generated and the fact it is national and global, and affects everyone in the community, the fact that the impacts of the recession have barely hit yet, means we find ourselves in a very different context.” 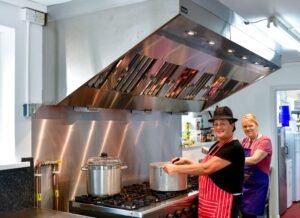 Among the charities highlighted in the report is Cumbria Meals on Wheels which faced both severe restrictions on providing its services and a serious financial shortfall.

“Lots of charities lost a lot of money throughout lockdown,” said project manager Trish Price. “We’re not here to make lots of money but we need to make enough to keep going. So many of us were just about existing and surviving.

“So suddenly when grants became available again it was like a light at the end of the tunnel. You could see it continuing, rather than just living from hand to mouth all the time.”

The grant came in the form of £10,000 to help Meals on Wheels keep going. It was used to kit out their new base in Shady Grove Road, Carlisle.

The report also reflects the respect and gratitude for the Foundation within Cumbria, summed up by one comment it received: “While other funders are still trying to decide the font for their application forms, the Foundation have turned it around and got the money out.”

The Cumbria COVID-19 Response Fund has to date raised £1.7 million with funds donated by local businesses alongside donations from the National Emergencies Trust appeal and many individuals.

Cumbria Community Foundation is continuing to raise funds to help those who need support as a result of the pandemic – now and in the future. If you would like to donate, click here.

Cumbria COVID-19 Response Fund: The First Six Months – to view the interactive elements, please save to your computer as a PDF, open the saved document and enable 3D content by going to: Edit > Preferences > 3D & Multimedia and then select the Enable playing 3D content checkbox.