A fund set up to support Cumbria’s charities and community groups during the COVID-19 crisis has received a welcome boost.

Since Cumbria Community Foundation launched the Cumbria COVID-19 Response Fund three weeks ago, the Fund has amassed more than £900,000 in donations.

A former Cumbrian, who now lives in Cornwall, has donated £100,000 to the Fund to help the Foundation provide additional funding to local groups supporting families. 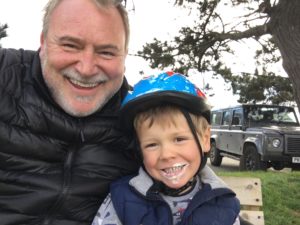 Mike Wombwell grew up near Maryport, attending Keswick Grammar School before completing a Business Studies degree, sponsored by the British Steel Corporation, at Sheffield Polytechnic. He then embarked on a career in business, living and working initially in the UK, then spending time in the Middle East, Germany, Vietnam, California and for the last 20 years, running his own business in Dubai. He now lives in Cornwall with his wife and young son.

“Now my parents have died, I very rarely get up to Cumbria, but even when living overseas, I liked hearing the snippets of news about the region and watching TV programmes about Cumbria. I often get a twinge of homesickness and have many fond memories of the countryside and people of my early years,” Mike said.

“I wanted to ‘do my bit’ to help to reduce the risks to some of the most vulnerable in society. I am making donations in Cumbria and Cornwall with a focus on alleviating difficulties faced by families with children in being able to afford the basics. I find myself in a privileged position where I can help, so I will. In fact, I think I should, and I am very happy to do so.”

Andy Beeforth, CEO at Cumbria Community Foundation said: “In three weeks, over 90 applications from charities and community groups have been received, requesting almost £750,000 between them. The need is great, and we can only support these groups thanks to our generous donors.

“Hundreds of people have donated so far and what this crisis has done is bring together a community. We continue to be inspired, but not surprised, by the generosity of people who care about Cumbria. The money that’s been donated is helping groups make an enormous difference in their communities, but we know that need is still growing and is likely to do so for some time.”