It was a cold and wet start to the year for the team at Cumbria Community Foundation who have so far raised more than £4,500 for charitable causes right across the county.

Staff and trustees kick-started a year-long fundraising campaign to celebrate the charity’s 20th anniversary in 2019, by splashing out and venturing into the chilly waters of Windermere on 8th January. 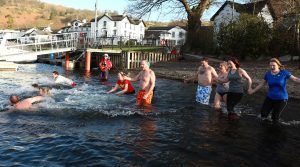 The money raised will go into the Cumbria Fund, which awards more than £100,000 to 50 community projects each year and helps improve the lives of disadvantaged people across Cumbria.

It’s all part of a year of special events called ‘Giving Back, Looking Forward’, which will celebrate the charity’s achievements to date and encourage the community to get involved in their own fundraising challenges.

Annalee Holliday, Grants & Donor Services Officer at the Foundation, said: “This year is the Foundation’s 20th Anniversary and we’ve set ourselves the target of raising £250,000 for the Cumbria Fund over the next 12 months. We hope that we have inspired other people to set themselves a challenge in 2019 and support the fundraising appeal.” 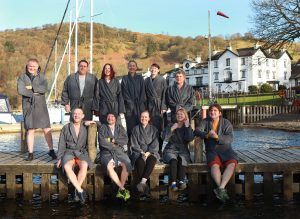 Andy Beeforth, Chief Executive of the Foundation, said the dip was “Absolutely exhilarating. It’s great to do this with the team as we celebrate our 20 year anniversary.

“The team were very brave, and it was very difficult as the waters were baltic! Thanks to everyone who has donated so far, we have raised an amazing amount of money, which will support community projects across Cumbria. We would like to thank Maryport Inshore Rescue and Simon Berry, High Sherriff of Cumbria and Low Wood Bay Resort & Spa owner who supported the team on the day.”

Donations can still be made online: https://mydonate.bt.com/fundraisers/windermeredip

If you have been inspired to support Cumbria Community Foundation, a fundraising guide is available to download from the CCF website to help you plan your own challenge: https://www.cumbriafoundation.org/20th-anniversary/challenge/